This Wasn't The Future We Were Promised

This week brought a stark reminder of how the promised future was hijacked by people who hate the us.
Billionaire Richard Branson took a test flight into space as part of the planned rollout of "space tourism". He even sported a rainbow ribbon on his flight suit, taking degeneracy where no deviancy had gone before. 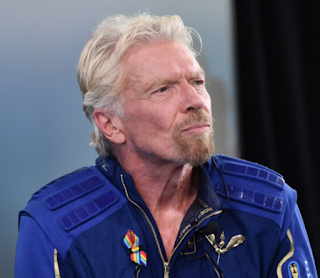 Not to be outdone, Amazon founder and billionaire Jeff Bezos is also taking a space flight on the 20th and his promo photo might be the most cringe thing ever. 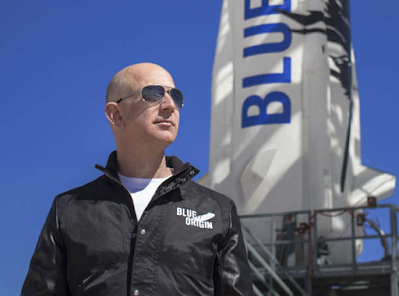 Someone convinced Jeff that he looks super cool in this photo, I bet they even told him to pop his collar up so he looks like Top Gun-era Tom Cruise. He is probably humming Danger Zone in his head while posing.
It reminded me of a post from January of 2020: The Dumbing Down Of America, where I looked at how kids like me in the 1970s just assumed, understandably, that the future would include commonplace space travel.
When I was born in 1971, we were just two years removed from the first manned moon landing. There would be a total of six manned landings, all by Americans, from July of 1969 to a a few weeks before my first birthday. I was born at the peak of the age of space exploration. As a kid I remember watching the shuttle launches and I recall pretty vividly the Challenger disaster in 1986 while I was at school. Growing up we watched Star Trek on TV and saw Star Wars, E.T. and Close Encounters of the Third Time in the theater. It seemed to us that we were on the cusp of exploring space, a new age of discovery where humankind would escape the bonds of earth, conquer the stars and perhaps even make contact with aliens! The future was bright.
As a child in the 1970s and 80s, 2020 seemed like a long way into the distant future and while we couldn't predict what that would bring, it was assumed it would bring a progressively better society and that space exploration and great technological achievement would make life immeasurably better. Colonies on the moon and even Mars were just assumed to be the natural near-future next steps.
Instead we get billionaire vanity projects.
Space is no longer the final frontier, at least not for the bulk of humanity. It will become the playground for the ultra-wealthy. According to Space.com, seats on Branson's Virgin Galactic will run around $250,000 each. There are lots of people who can afford that but the vast majority of humanity will not. As chaos descends on the world, can we be far from seeing space colonies where the wealthy can flee from the devastation? The proles will be ordered to drive tiny electric cars to "save the environment" while the ultra-rich blast off on huge rockets to take selfies in space, just like we will be told to eat the bugs to reduce our climate footprint while the rich eat steak.
That starry eyed kid I used to be in the 1970s is facing the ugly reality of life in the 2020s. It isn't a bright future for humanity but a slow war of attrition that a small cabal of elites are winning.
I don't dream about space travel anymore, I just dream of a future where my family will be left alone. Even something that simple seems as fantastical as exploring the stars.
Posted by Arthur Sido at 9:39 AM