The Situation In South Africa Summed Up In One Tweet 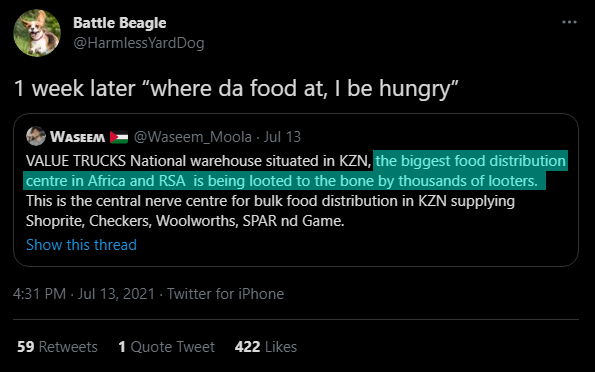 American Whites often comment while watching blacks burn down their own neighborhoods something to the effect of "Why are they doing that? Why would you burn down your own neighborhood?". The problem is trying to think like a European, evolved in the north where you had to set aside food, firewood, and other staples in nice weather to keep from starving in cold weather. Our ancestors who learned this survived and then conquered the world. They ones who didn't figure it out died in the winter. I think we were better off when the weak and stupid didn't survive until spring.
With American dominance exiting stage left and a new, less suicidally altruistic world order taking over, the nations that have been perpetual dependents of the West are going to be in real trouble. Haiti, South Africa and most of the developing world are completely reliant on the generosity of Western nations. Absent this aid and peacekeeping forces, they revert to their normal state of chaos and savagery.
The problem in South Africa is not Marxist leanings or institutional racism left over from apartheid, it is demographic. People groups that have never on their own shown the slightest interest in or ability to form a modern, civil society can hardly be expected to maintain a modern, civil society for any length of time left to their own devices. If anything, it is fairly impressive that South Africa has resisted collapse for this long, something I assume can be attributed to the 20% of South Africans who are White, Cape Coloured or Asian.
The infrastructure damage in South Africa will not be easy or quick to replace, if it ever is replaced at all. Who wants to invest a bunch of dough in a place where this sort of thing can happen for any or no reason at all? Absent some significant intervention by the West, I would put the odds at 50-50 that South Africa simply collapses completely into a nightmare.
It is also worth noting that the collapse will come quickly and catch many unawares if/when replicated in the U.S. and that you should see the videos of infrastructure and supply lines being looted and burned as a reminder to check your own situation. What would your day be like if you couldn't get to the store for a few weeks?
All across the globe the blank slate egalitarian worldview is coming apart. It will soon do the same in the United States and the videos from last summer's riots and current events in South Africa are a stark reminder of why we will never, ever, give up our firearms and the means to defend our families, our homes and ourselves.
Posted by Arthur Sido at 11:50 AM