Speaking Of Supply And Demand

As a follow-up to the prior post Supply And Demand, Eric Striker brings to our attention a push by Federal "law enforcement" to get more hate crime charges from local police:
New FBI Initiative Will Put "Hate Crime" Quotas On Local Law Enforcement
As Eric points out: Hate crimes laws are political and racially motivated. This new initiative is part of the broader effort by the Biden regime to create a narrative of there being hordes of dangerous White racist extremists out looking to blow up Jews, shoot Africans and beat up fags and trannies. The program was rolled out by U.S. Associate Attorney General Vanita Gupta and having someone named Vanita Gupta as an Associate A.G. is a clear sign of the deep shit we are in and how the same people Whites invited into our country have now turned on us out of resentment and ingratitude. According to Gupta, if your local law enforcement outfit isn't charging anyone with hate crimes, the Feds are going to be badgering you to find out why not.
"Approach each and every law enforcement agency in your district that reports zero hate crimes or does not participate in hate crimes reporting to learn what's going on and why that's happening," the Justice Department’s number three in command said to the several hundred personnel listening.
Notice the assumption. They assume that every local law enforcement agency is experiencing hate crimes so if you aren't reporting any, then obviously you are hiding something or have some sort of "inherent bias". It can't possibly be because no in was committing a hate crime.
The article Eric links to focused on an alleged bomb plot against a synagogue by a guy named Richard Holzer. Holzer was charged with "hate crimes" and explosives charges as well as this:
Holzer pleaded guilty to intentionally attempting to obstruct persons in the enjoyment of their free exercise of religious beliefs, through force and the attempted use of explosives and fire, in violation of Title 18, U.S. Code, Section 247, and to attempting to maliciously damage and destroy, by means of fire and explosives, a building used in interstate commerce.
Notice that all of it was "attempted". He didn't actually do anything. Also notice that somehow a synagogue is considered a "building used in interstate commerce". WTF? The guy was about as cringe as you might expect. 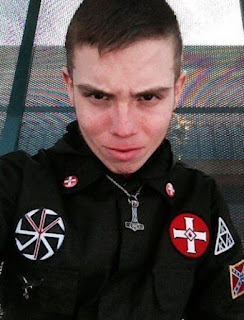 If I didn't know better I might think this guy was a Fed who they dressed up using every "hate symbol" they could find from the SPLC database. If I didn't know better.
The Feds were working undercover to egg this guy on, once again inciting someone to do something so they could then arrest them.
Holzer talked to associates for months about attacking Temple Emanuel, and he visited the synagogue to observe Jewish congregants. During a meeting with undercover agents to discuss his plans, Holzer repeatedly expressed his hatred of Jewish people and suggested using explosive devices to destroy the Synagogue. Holzer told the undercover agents that he wanted to “get that place off the map.” Holzer further admitted that he coordinated with the undercover agents to obtain explosives, including pipe bombs.
On the evening of Nov. 1, 2019, Holzer met with undercover agents, who provided Holzer with inert explosive devices that had been fabricated by the FBI, including two pipe bombs and 14 sticks of dynamite. Holzer removed a copy of “Mein Kampf” from his bag and told the undercover agents that the explosives looked “absolutely gorgeous.” Holzer admitted that he planned to detonate the explosives several hours later, in the early hours of Saturday morning, Nov. 2, 2019. After his arrest, Holzer explained that “The event planned for tonight would define me as a person who would die for his people.”
The FBI provided him with fake pipe bombs and dynamite. Would this dumbass ever have taken his plot this far if the Feds were not encouraging him and offering to sell him explosives?
Something else pretty important from a different story:
According to a criminal complaint written by FBI Special Agent John Smith, the investigation into Richard Holzer began after he began messaging with an undercover FBI agent posing as a female white supremacist on Facebook.
What an idiot. Taken in by a honeypot that he never even met.
The guy was 27 years old and looks like a loser. He was 27 years old and just moved out of his parent's house and worked at a grocery store. I am sure that the idea of a girl who wanted to chat with him was super exciting and I am likewise certain the Fed was encouraging and flattering him when he said something inflammatory which in turn likely caused him to ratchet up the rhetoric. I shouldn't need to say this but 100% of the "women" you meet online are dudes and likely Feds so stop being stupid. Even far-right girls aren't turned on by you threatening to blow up a synagogue.
Also according to the article, there is more sketchy stuff. This is from the complaint: 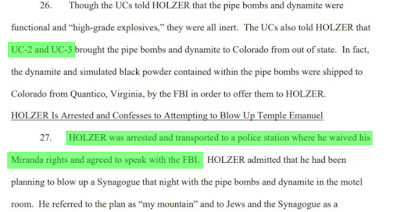 "UC-2" and "UC-3" are designations, I assume, for undercover 2 and 3. That means there were at least three Feds egging this guy on. Not to mention that this guy who was supposedly in the "White supremacist" movement for a decade gets popped by the Feds and immediately waives his Miranda rights and spills his guts about the plot. Who does that? I would put the odds at close to 50/50 that this guy is a complete fabrication who is now living under an assumed name somewhere rather than being in a Fed lock-up or maybe was busted for weed and given the chance to avoid jail by agreeing to be a patsy.
Even more:
The ADL says they have been tracking Holzer for several years.
That is important. Federal law enforcement is working hand in glove with partisan, far-Left anti-White outfits like the ADL. It is quite certain that elements of the DOJ are in contact with people at places like the ADL and SPLC. It is also certain, and I am going to keep repeating this, that someone from these groups and/or the Feds are reading a lot of what you post. Sure you might comment anonymously but on most blogs like mine that are hosted by Google, do you really think they can't trace you back if they want? Oh, are you using an incognito browser to hide your identity? 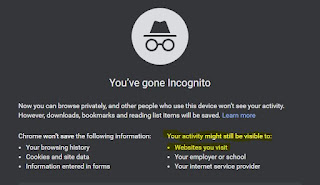 Your girl might not know which porn sites you visited but those sites probably know you were there. Maybe if you are using a VPN and/or the Tor browser but even then I wouldn't trust it so the safest bet is to not say anything stupid online.
The lesson from Richard Holzer and Tres Genco, the alleged wannabe "incel mass shooter", and so many others is this: the Feds need a lot more "right-wing domestic extremists" than actually exist so they will go out of their way to find people online and try to entrap them into saying stuff that they can use to arrest them. Don't be stupid online and for fuck's sake go meet a real girl in real life instead of getting snookered into saying incriminating things on Facebook to impress some fake girl.
There are a whole bunch of Feds who spend all day online trying to identify people they can entrap and they are probably looking at you.
Despite the thousands of real crimes actually being committed across America daily, the focus of the Feds is on the phantom White supremacist menace and enticing young White losers into saying something they can arrest them for. Don't be the next guy with your name in a DOJ press release.
Posted by Arthur Sido at 10:49 AM