Have you come here for a cheerful, inspiring and uplifting post about freedom and independence from tyranny?
You've come to the wrong place.
Let's start off with one of the darkest tweets to ever grace the pages of twitter and get that out of the way.

To paraphrase Will Hunting. Do you like apples? Well how about dem apples?
Dark. Bleak. Black pilled. All for sure. Also dead right on the money.
For years I have had the lingering feeling that we are witnessing the end of a great era. Where we live it is less apparent than it is in many places. Our nearby little town has Little League games, there are fireworks on the 4th, people mow their lawns and tend their gardens just like they have for generations. It is all they want in return for a lifetime laboring to keep the wheels turning in America but even that is too much for our enemy. I recall a post from almost three years ago, Reluctant Radicals, where I wrote:
This really struck me a few summers ago. I was driving around the lake where my parents were living at the time in Northern Michigan. The lake is surrounded by little cottages owned by mostly middle-class people from down state that scrimped and saved to buy a cabin "Up North". On weekends they were there with their kids or grandkids, mowing their little lawns, painting the cabin, watching the kids play in the lake or just going for a walk. They lived in a little bubble of routine: work all week, leave work on Friday a little early and go up north for the weekend.
I think it was the lawn mowing that was most poignant for me. Here are regular people that spend the whole year working their butts off to afford a little cabin up north to relax and they were perfectly content to drive 5 hours on a Friday to spend Saturday mowing the lawn. Now I will grant you that a summer day in Northern Michigan isn't like a summer day pretty much anywhere else. The days are long, the clouds are few, the breeze is gentle, the temperature is perfect and the sky is so blue it almost hurts to look at it. There is no place better in the summer. They aren't asking much. They willingly pay their taxes, deal with the indignities of life, all so they can have these little, fleeting moments of absolutely perfect tranquility.
It is those moments of tranquility that infuriate the Left. It has become almost cliché to point out the freaks and weirdos in antifa mugshots. These people are the detritus of heritage America, genetic losers at the bottom of the gene pool. These are the kids who were mocked and belittled in high school and their rage and thirst for vengeance against normal people is what drives them. They are unhappy and painfully aware of being freaks, so any semblance of happiness or normalcy triggers them into a frothing at the mouth, hyperventilating rage. They are useful idiots to be sure but even a weak useful idiot can be a dangerous tool in the hands of their betters.
The cosmopolitan elites, the cabal of ruling class figures who are pulling the strings? They are not unhappy, quite the opposite. They live lives of luxury and decadence. They do what they want, when they want. Why would the most powerful men in the world, business and political leaders and even royalty... 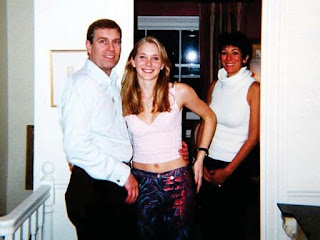 ....be hanging around with a creepy dude like Epstein? They could have an unlimited number of women but they were apparently screwing teenagers. Why? Because they could. They feel like they can do anything they want and get away with it, and for the most part they are right. Have you ever rolled up to a stop sign out in the country, able to see the crossroad for a mile in either direction, so you just drive through without stopping? You get a little thrill because you broke the law and got away with it, even something as minor as running a stop sign. Imagine that times a million and you start to see why the rich flaunt the law. My contention, having worked with some extraordinarily wealthy people, is that the best part about being rich is not what you can buy but the feeling of being better than others.
While the leftist foot soldiers are resentful of normal people for being happy and content, the elites don't like to see us happy because when people are miserable it accentuates how much better than us they really are, and that is whole point of being rich. That is the "Why Bother?" point of the Great Reset, not to have a little more wealth but to increase the gap between the wealthiest and the rest of us.
What has become of the "Great Experiment" of men dictating their own fate, voting for leaders rather than leaders assuming power by an accident of birth? Where today is that great shining city on a hill that was the exemplar of freedom and opportunity for the world?
It is gone and soon to be forgotten, destroyed not by force of arms but by rot from within. All the time we were spending untold billions to kill our brothers in Europe and getting entangled in foreign wars on behalf of Our Greatest Ally™, an alien adversary was working behind the scenes to subvert the institutions that preserved our republic, from schools and government to churches and civic organizations.
We are not a free people, not in any sense. We went out to eat last night at a national chain steak place, decent grub, but I remembered as we sat there eating like normal people that just a year ago you couldn't do this. We were supposed to be locked in our homes, terrified of venturing out, all because of a bullshit "pandemic" that had a 99%+ survival rate.
Then came the 2020 elections and everyone with half a brain knows that the whole thing was rigged but no one cares, or at least no one who can do anything about it. The American people, the actual American people and not the people who happen to live here, have been put on notice: 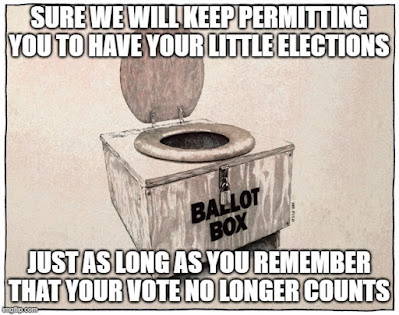 Then to top it off, the giant Fed bois psyop on January 6th that resulted in one women being murdered by a black Capitol cop who will never even face questioning for killing her but the event will still be used to restrict our few remaining liberties.
That is all just in the last few months but the degradation of our Republic has been going on for much longer.
Independence Day? How independent are any of us?
Most of us work at wage slave jobs where we can be fired for little or no reason for expressing our political views outside of the workplace. Students are kicked out of school for saying something childish and silly when they were kids. The military is engaged in a purge of anyone who isn't on board with the new globohomo armed forces dreamed up by the brass. The gun control crowd is eagerly awaiting the false flag so they can disarm Americans in earnest. While we work to pay our bills, millions of people are sitting on their asses in apartments they can't be evicted from, getting checks from the government for playing video games, smoking pot and eating delivery Taco Bell. The public square is now virtual and is controlled, with the blessing of the occupational regime, by a handful of companies that are monolithic in their political views and ruthlessly quash dissent.
If this is what independence looks like, you have to wonder if the alternatives are really worse.
Is this what it felt like to be a German in the 1930s, a desperate feeling that anything would be better than what was happening? 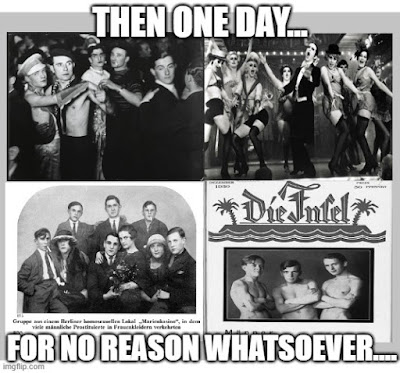 Have a great Independence Day I guess. Paul Craig Roberts thinks this might be the last one. I am pretty sympathetic to his essay and you should read the whole thing. Vanessa Williams, famous as a disgraced Miss America, sang the "black national anthem" at Independence Day celebrations. CNN ran a piece titled Independence Day fireworks, once joyous celebrations, are now nightmares for these gun violence survivors that combines gun grabbing rhetoric with the idea that maybe we need to stop shooting fireworks because of people with PTSD, which is get but concern for those people isn't  the motivation for the author, one Amir Vera. The whole point of the 1619 Project is to retconn American history to paint slavery as the single most important facet of the United States and replace July 4, 1776 as the pivotal date in our history.
What we once had is now lost and no longer are we a free and independent people. Our lot today is far worse than the conditions we revolted against in the 18th century and those men would be horrified and disgusted to see what has become of this republic. For certain there are still plenty of good people in America but our numbers are dwindling and our influence is waning and nearly gone.
What comes next is something no one will want to celebrate with barbeques and fireworks.
Posted by Arthur Sido at 10:56 AM