I Knew They Could Do It!

It took until late in the day on the third day of the three day weekend but they hit the century mark for shootings in Chicago! 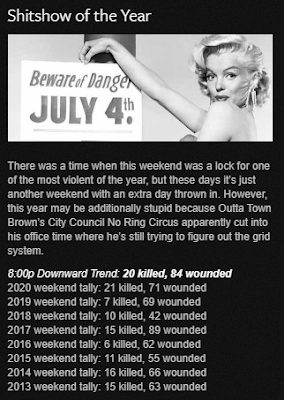 104 shot with a few hours left. Congrats!
Overall around the country we saw at least 16 mass shootings in places as diverse as Omaha, NE and Lancaster, PA. My hometown of Toledo got on the board again with 11 people injured and one dead in a mass shooting that occurred in a lovely part of town when a "block party" turned ugly with "hundreds of people" fighting. Guess what the video of the neighborhood suggest about the racial make-up of the area?
Posted by Arthur Sido at 10:16 PM