Gonna Be A Hot Time In The Old Town Tonight

The weather forecast for Chicago portends a lot of spiciness.... 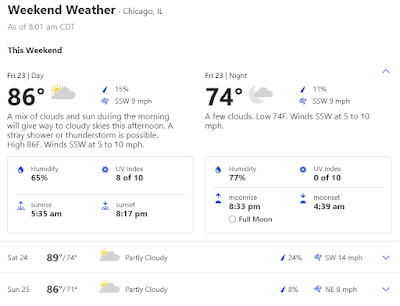 Hot and humid, no rain. It is going to be a warzone up in the Windy City. This has been a busy week already, with Friday and Saturday to go they are already over the century mark for shootings 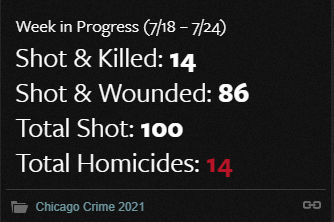 It is easier to rack up those kind of numbers when you generate headlines like this:
Shooting of Party Bus Riders Marks Third Mass Shooting Within 6 Hours Wednesday: Police
Impressive! The homies are already planning retaliatory strikes....
Of course what the media is really concerned with is the foiling of an "incel" who was allegedly planning to commit a mass shooting at a sorority. Tons of stories about this.
Police Foiled An Ohio Incel's Plot To Kill Women In A Mass Shooting, Prosecutors Say
According to the story, this guy is being charged with a "crime" I didn't even realize was a crime:
An Ohio man federal prosecutors say is an "incel" was charged in federal court this week with attempting a hate crime for his plot to kill women.
...
Prosecutors say attempting to commit a hate crime is punishable by up to life in prison. One count of illegally possessing a machine gun is punishable by up to 10 years.
Attempting a hate crime? What the fuck does that even mean? Whatever it means, you can get a year in the slammer for attempting to commit a hate crime. It sounds like just doing stuff like Google searching frats and sororities and legal questions is "attempting a hate crime" and can get you arrested. He also had some guns and body armor, including a bump stock and a weapon with the serial numbers allegedly filed off. The guy, a 21 year old named Tres Genco looks as cringe as you might expect.... 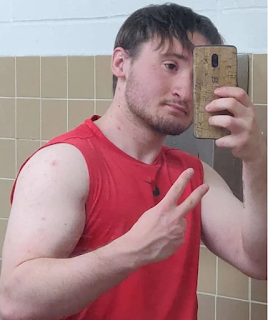 Genco washed out of Army basic or shortly after for "entry-level performance and conduct" which sounds like "he was a whackjob" to this civilian.
He had been posting on some incel website for a couple of years and the cops have been looking at him since March of last year but he was arrested on July 21, 2021 more than a year later. I suspect this guy was being egged on by the Feds but they finally got tired of waiting for him to snap so they arrested him and are moving on to a new unstable patsy for their false flag.
Important lesson here. Don't fed post. They are watching all of the sites you like to post on, they know about them all and they are looking for people they can manipulate into saying incriminating stuff and even better that they can wind up enough to actually go commit a mass shooting. You commenting anonymously doesn't mean shit, they know who you are.
Don't be stupid online, it will get you tossed in the hoosegow for a year just for talking about being stupid and you won't be doing any tactical goon shit if things go down while you are getting turned into someone's bitch in a prison.
Anyway, I am glad to know that a guy "attempting a hate crime" gets more press than three actual mass shootings in six hours in one of our largest cities. Priorities!
Posted by Arthur Sido at 9:56 AM