One of the Left's favorite "arguments" is that having an AR-15 is useless against the mighty American military. Even old Joe got in the act with his "nukes and F-15s" rambling threat. Oddly the same people say that AR-15s are "weapons of war" 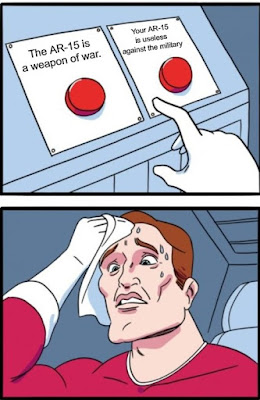 Is that true? Do regular citizens stand no chance against the U.S. military, even assuming you can get the U.S. military to fire on their fellow citizens?
The American military of 20 years ago? Maybe.
Our new and improved woke military? I am starting to like those odds.
As the neo-Bolsheviks try to drive out the very people who made America's professional military the most dangerous in history, "right wing" White men, what remains is, shall we say, not the cream of the crop.
Exhibit A from Angry Cops, we have Private La'quiiashatala on video coaching recruits on how to get out of the military by things like claiming a religious exemption or faking a mental illness...
I haven't served but I assume faking a mental illness to get out of your commitment and coaching people to do this would be conduct unbecoming or something. Really, I am not that concerned about this mental midget patrolling the streets of Fort Wayne to keep the extremists in check.
Exhibit B from cdr salamander: Culture is Upstream of Everything
RTWT but the bottom line is that the U.S. Navy is woefully unprepared to wage a serious naval war thanks in large part to spending a lot more time worrying about Pride Month than in preparing for combat against actual enemies. Granted our Navy is at least on paper far superior to anything anyone else can field, including the Russians and the ChiComs, but a naval conflict today over something like an invasion of Taiwan would involve far more casualties than it should because of the state of the Navy and the military in general.
I won't go into the obvious stuff like the military in the U.S. having vulnerable supply lines, not to mention very vulnerable dependents. You can't hide your entire extended family on base. Nor will I point out that there are millions of vets and former LEOs who are very much on /ouside/ who have the training and the willingness to pull a trigger.
Bottom line? For all of the blusters of Leftists on social media and Creepy Joe whispering his threats, the military versus 80 million Americans isn't the mismatch they think.
Posted by Arthur Sido at 7:00 AM