At Least Republicans Are Good For Something

Not anything useful like demanding answers about the January 6th political prisoners or the murder of Ashli Babbitt, or investigating who was really responsible for the creation and "accidental" release of the Kung-Fu Flu or that our cities are shooting galleries or that we are spending millions weekly on making sure the wall doesn't get built. Nope, none of that stuff but they are all about what really matters to the American people: Isreal.

Florida Gov. Ron DeSantis (R) is coming out against Ben & Jerry's over its recent decision to end sales of its ice cream in Israeli-occupied West Bank and east Jerusalem.
In a letter to the State Board of Administration of Florida, DeSantis urged the agency to place Ben & Jerry's on its Continued Examination Companies that Boycott Israel List. It also called for the same to be done to Unilever, which it noted is “a publicly traded company in which Florida holds multiple investments” and that also owns Ben & Jerry's.
He also called for the agency to initiate a process to place both entities on its Scrutinized Companies that Boycott Israel List and asked that he be provided with an update on the status of the process immediately.
DeSantis is the heir apparent to Trump, another political figure who talks about the issues that impact actual Americans but only takes action when it comes to Our Greatest Ally™. I am sure Trump 2.0 will be just as effective as Trump 1.0 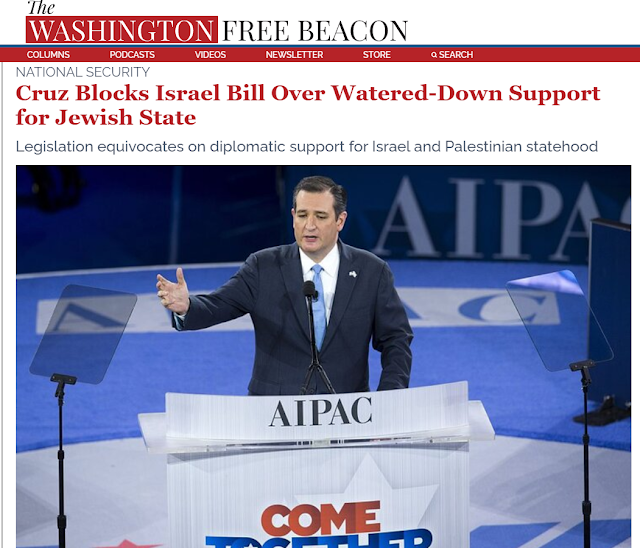 Sen. Ted Cruz (R., Texas) is blocking a piece of Israel-related legislation over concerns that the measure's language waters down support for the Jewish state, congressional sources confirmed to the Washington Free Beacon on Monday.
Cruz will also introduce an amendment to the legislation that strips the contested language and replaces it with a statement enshrining American support for Israel, according to a copy of that amendment also obtained by the Free Beacon. The senator will block the bill from moving forward until his amendment is considered.
Making supporting Israel the law, that is what I was thinking when you hear about America First!
Just imagine if one of our two political parties would get as energized about the needs of the American people as they do about the hurt feelings of Our Greatest Ally™....
Posted by Arthur Sido at 11:00 AM