All Hat, No Cattle

One of the maxims I try to live by is this:
Truly impressive people don’t need to endlessly remind other people how impressive they are.
People telling you how impressive they are and attempting to seem like deep thinkers or that they are super cool are invariably creeps and mental midgets. Just about everyone on social media with their credentials in their user name are dimwits desperate to be taken seriously. It happens everywhere, there are plenty of people on /ourside/ that are far less effective than they could be because they endlessly have to tell people how intelligent they are or what a badass they are. Again, smart people don't need to tell people they are smart and badasses don't need to brag about being badasses.
At the heart of a lot of this posturing is one of two motivations, a desperate need to be taken seriously or money. Attention seekers are sad, hustlers are something else. I am not all that concerned today about the attention seekers who fight imaginary wars against opponents that don't even know them or who spend all day trying to argue with people online to get likes and upvotes. My concern today is with the people motivated by money.
The world has always been full of hustlers, slick fast talkers who can baffle the gullible. The internet is making this worse and it is not surprising that the prepper/2A community has our own share of them....
Here in America there is a long tradition of the rugged individualist living apart from society on his own terms. Daniel Boone, Davey Crockett, the pioneers traveling to new lands in the west to carve out a homestead. It is one of the most abiding themes of America. No one wrote stirring novels about mowing a postage stamp sized lawn in a subdivision.
As the Cold War dragged on in the 1950s, many Americans became interested in fallout shelters in case the Soviets nuked us. It was a real concern and there were several incidents where this might have actually happened.
Then in the 60s and 70s violent crime started to take hold in American cities, leading to lurid footage of race riots and the rise of movies like Dirty Harry and Death Wish that featured men who were willing to go beyond the law to take matters into their own hands. By the late 1970s a new genre was rising, the post-apocalyptic survival story. The Mad Max movies portrayed first a world coming apart and then in the Road Warrior a vision of a society completely broken down into chaos. Lots of book series sprang up revolving around survival after a nuclear war and I read a bunch of them as a kid in the late Cold War era.
When Clinton took office and enacted the "assault weapons" ban, it came on the heels of the slaughter at Waco and Ruby Ridge. The buzzword then was all about the "militia movement" that was short-lived. In the 2000s the concern was Islamist terror and then the election of Barack Obama, the most openly far left President in my lifetime. Now, after a stolen election in 2020 following a "pandemic" and widespread violent unrest, coupled with increasingly charged rhetoric from the Left and a teetering U.S. and global economy, people are thinking hard about prepping once more.
Anytime there is a highly emotionally charged subculture, you can be sure it will attract hustlers and grifters. It is true in politics and in religion especially and it is increasingly true in the 2A and prepping communities. I was reminder of this thanks to an article in the Intercept (HT: Johnny Paratrooper at American Partisan)
THE FUTURE DYSTOPIC HELLSCAPE IS UPON US
The Rise and Fall of the Ultimate Doomsday Prepper
The Intercept is clearly not a sympathetic outlet but the information and lesson are solid. The very long story is about one Barrett Moore, a kind of Harold Hill for preppers. Moore had one scheme after another, in a tangled web of shell companies, that all were aimed at the prepping community. He managed to bilk some pretty wealthy people out of a lot of money, including best-selling author Brad Thor who writes hokey adventure novels that apparently feature the ubiquitous "former Navy SEAL" characters (I haven't read any of his books, maybe I am wrong). The article is pretty interesting but what grabbed my attention was this:
As Moore’s fortunes ebbed and flowed, so too would his venture abruptly shift in scope and detail (as well as corporate monikers, à la Blackwater). But no matter how many LLCs Moore shifted through, selling Life Continuity remained a constant. As a product, Life Continuity works like the grandest of all possible insurance plans, a hedge against doomsday geared toward the right-leaning rich. Just as the most opulent health and dental plans entitle patients to spa-like care in the case of personal misfortune, Moore offered a vision of serenity and safety in case of global mayhem: the hope that while cities burned and nation states crumbled, your family could continue their way of life. It was an almost biblical promise of salvation and hope amid chaos, right down to promotional materials that read like they were plucked from Scripture. At one point, Moore’s venture was named Sovereign Deed. His hideaway for the chosen was called the Haven.
Sovereign Deed. The plan was to create survival compound, an escape hatch, for the ultra-wealthy. If things went sideways, Sovereign Deed would evac their clients to a small rural airport where they would then ride out the chaos. The town this little rural airport was located in? Pellston, Michigan. The reason this caught my attention was that we used to live in a small rural Northern Michigan town called Alanson less than ten miles from Pellston (red arrow points to airport, blue to where we lived) 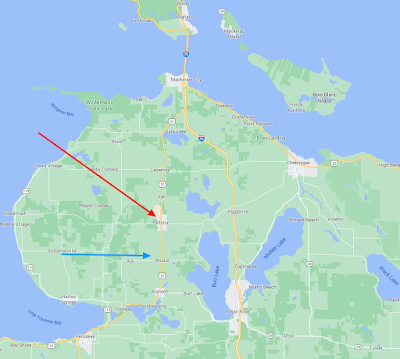