With the withdrawal of American forces from Afghanistan the military-industrial complex is going to need a new conflict to justify spending trillions on the gear needed for yet another unnecessary war. Good thing we already have a pre-existing villain hated by both Boomers and younger liberals: RUSSIA!
In jab at Putin, Biden warns cyberattacks could cause ‘shooting war’
President Biden on Tuesday warned that cyberattacks could lead to a “shooting war” while disparaging Russian President Vladimir Putin as desperate and “dangerous.”
....
“I can’t guarantee this, and you’re as informed as I am, but I think it’s more likely we’re going to end up — if we end up in a war, a real shooting war with a world power, it’s going to be as a result of a cyber breach of great consequence.”
Wow, we already had a couple of cyberattacks on JBS and a pipeline that totally were from the Russians and not plots hatched in-house by the Feds.
Years of chatter about Russia as a serious threat have created in the minds of most Americans a predisposition to going to war. Add in the leftover memories of the Cold War and you have a great place to start if you want to launch of new Forever War.
One minor problem. Russia ain't Afghanistan or even Iraq. Russia has over one million active duty personnel in their armed forces and zero percent of the woke crap in our military plus a couple million reservists. They aren't using Cold War relic castoff gear, their stuff might not be as technologically advanced as ours but it is still pretty damn good. Not to mention that the Russians seem to still remember that the purpose of an army is to kill your enemy, not provide free gender reassignment surgery for deviants.
Who do you think would win if you took five Russian soldiers and five U.S. soldiers picked at random, threw them in a pit with a couple of knives and clubs and told them to fight to the death?
This is Sergey Shoygu, the Russian General Of The Army and Minister of Defence of the Russian Federation..... 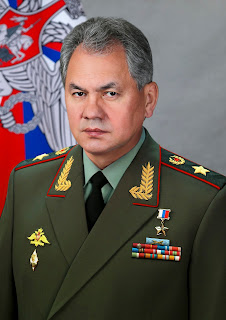 He looks like a soldier and also like someone who would gut your from stem to stern for a nickel.
And this is Lloyd Austin, our diversity hire Secretary of Defense landing in the Philippines wearing not just a mask but also a face shield and fist bumping other officers.

Wheels down in the Philippines. pic.twitter.com/S8kjbTKMxW

What a fucking embarrassment. While Lloyd Austin is engaged in a jihad against normal White men in the military, Shoygu "...ordered commanders to begin every morning in the barracks with a rendition of the Russian Anthem, to compile an obligatory military-patriotic book reading list...". Like an actual leader of fighting men.
Not only would we likely lose a "shootin' war" with Russia but at this stage I would be inclined to root for the Russkies.
If the next set of lockdowns fail to work, don't be surprised to see increasing provocation of the Russians in order to instigate a shootin' war. I am sure it will go swimmingly.
Posted by Arthur Sido at 1:50 PM