Some brief news/interesting items to pass along....
San Jose plans to be first U.S. city requiring firearms owners to pay back taxpayers for gun violence
....gun owners would be expected to learn of the new requirements through news coverage, social media and City Council proceedings. They would then pay the fees through a city website, increase their insurance coverage and print compliance forms to carry with them. Under the ordinance, police who encounter gun owners lacking proof of compliance will be authorized to confiscate the weapons.
Papers please! As usual this is aimed at law abiding gun owners, making the costs higher to defend yourself, because of bad actors who obviously won't pay the fee or carry the insurance. Of course poor people won't have to pay the fees either. The same plan is requiring the videotaping of all gun sales....
San Jose mandates videotaping of all gun purchases
San Jose joined Chicago and several smaller California cities — including Campbell, El Cerrito and San Carlos — in requiring the videotaping of gun sales, according to the Giffords Law Center.
The videotaping law is working wonders in Chicago! Want to be that felons purchasing guns out of the back of a car won't get videotaped?
Food prices are going to just keep on rising....
Hog prices are cooling after a blistering 183% rally as China announces herds have recovered from African swine fever
Hog futures contracts have fallen 14% in June as China's herds recover from a 2018 outbreak of African swine fever more quickly than expected, according to the Wall Street Journal.
Cooling hog prices come after a wild run-up over the past year. Between April 2020 and this month's highs, futures contracts surged 183%. Consumers have begun to feel the pinch, with pork prices at US grocery stores rising 5.4% year-on-year in May, according to NielsenIQ.
Earlier this month, the agriculture ministry said hog herds grew 23.5% in May year-on-year, reaching 98.4% of 2017 stocks. The swine fever outbreak ravaged China's pig population, 40% of which died off or were culled in 2019. The country produces half the world's pork.
Assuming they aren't lying about their hog numbers like they lied about their coronavirus bioweapon getting loose. Unlike cattle, you can get more hogs in a hurry as they have large litters and have a much shorter gestation period, around 114 days or less than four months versus cattle with a gestation of around 280 days and only typically one calf. Regardless, the global food supply is very shaky and there are a lot of people who need to eat in places that don't raise enough food to feed them.
1-month-old girl among 7 wounded in Englewood mass shooting
They are getting a head-start on the weekend in Chi-Congo with a Thursday mass shooting. Thursday was a shooting gallery in Chicago:
A violent day in Chicago: 4 killed, 28 wounded, including three young children seriously injured
On the day Chicago’s top cop touted declining crime numbers, the city was hit with one of its most violent days of the year Thursday: four killed, 28 wounded, including three young children who were seriously injured.
There have already been 100 people shot this week in Chicago. 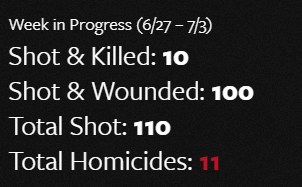 Cool today in Chicago but upper 80s and no rain Saturday and Sunday so that bodes ill for a ton of shootings.
The new Air Force fitness test will feature walking instead of running and modified push-ups
Our next war is gonna be great.
16 ESSENTIAL SUPPLIES YOU NEED IN YOUR EMERGENCY FIRST AID KIT
Pretty basic stuff but still worth a read if you are new or re-evaluating your kit. As noted, this is a minimum starting place.
Posted by Arthur Sido at 9:50 AM