Why Aren't They On /ourside/?

In 2007 John Derbyshire wrote an essay proposing what he calls an "Arctic Alliance". The basic gist is that the northern hemisphere dwelling people of higher IQ and lower fecundity, "Ice People", will need to band together to stave off the exploding population of the lower IQ, higher fecundity "Sun People". In other words, East Asians, Europeans and North Americans versus Africans, South Asians and mestizos from Central/South America. This has yet to materialize and it seems the opposite is happening.
This dovetails with something my wife and I talked about the other day, sparked by her seeing a young, intelligent Asian woman with an "immigrants welcome" sign in her home that featured a drawing of a black woman. On paper it doesn't make much sense. Asians have been victimized by blacks where their neighborhoods overlap for decades. Who can forget the iconic "rooftop Koreans" during the L.A. riots defending their businesses? 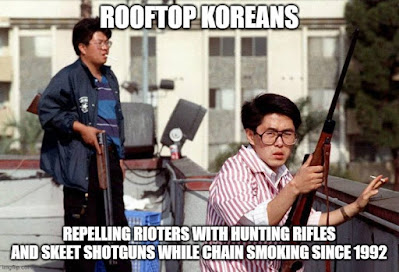 They are still being victimized by blacks in 2021. Not to mention that blacks in general represent to Asians the antithesis of everything Asians stereotypically believe in: hard work, discipline and industriousness. But it still seems like Asians prefer blacks over Whites, and certainly they reflect this in their voting patterns. Why do people who value family and economic opportunity vote for Democrats?

2020 is not an outlier because Asians don't like Orange Man Bad. They voted even more overwhelmingly for Obama in 2012...

Granted, "Asian" covers everything from Pakistanis to Koreans to Chinese so that is a broad category but still as a whole the Asians who come here share some basic "family values" and tend to be hard working, not to mention that Asians in America tend to be the beneficiaries of the "White supremacist" system we have created. 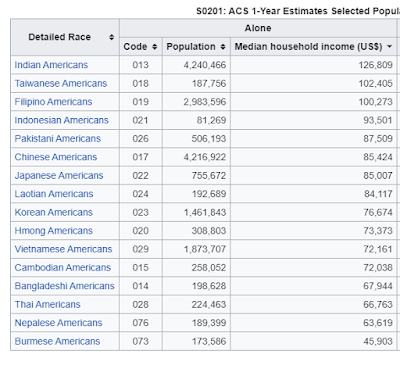 By contrast Whites have a median household income of around $65k while blacks, as usual, are way behind with a median household income of barely $43k. A household with an income of over 100k is getting whacked with taxes and even the lower IQ, lower earning groups like Nepalese, Burmese and Vietnamese who tend to be refugees are still often entrepreneurial. In general the Asians who come here tend to be smarter or more industrious or both but they still vote for the party that traditionally punishes success and rewards sloth and irresponsibility.
The same can be asked of Jews. Despite the slavish devotion of Republicans to Israel and what would seem to be similar economic goals, Jews vote for Democrats overwhelmingly. Like Asians, Jews are  victimized by blacks at much higher rates than by any other group and many black leaders are openly (and actually) anti-Semitic, from Al Sharpton to Farrakhan to Ilhan Omar. In 2016 Donald Trump, a man who has a Jewish son-in-law and his own daughter who converted to Judaism, still did just as poorly as Republicans ever do with Jews. 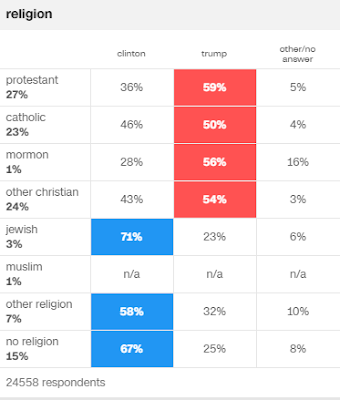 The most Jew-friendly President in American history didn't even get a quarter of the American Jewish vote. The people he did get to vote for him were largely American evangelicals who think that the new secular state called Israel is deserving of unwavering support, mostly because very few of them understand the New Covenant which is the basis for their own faith. The Jews undoubtedly laugh at the dumb evangelicals who give them whatever they want while the Jews vote in opposition to them every election and hustle them out of money to support "God's Chosen People™", people who reject everything those evangelicals believe in.
In 2020 we don't have any idea how Jews voted because the media stopped reporting that figure according to several outlets, like The Times Of Israel:
In 2016, the National Election Pool found that 71% of Jewish voters chose Hillary Clinton and 24% opted for Trump. But there were no Jewish results posted this year, The Washington Post said, because there were “not enough respondents to break down details.”
Bullshit. There are plenty of precincts that are well known to have lots of Jewish voters. It is almost like they are hiding something, like the fact that while Republicans suck up to Jewish voters endlessly, they only get a tiny fraction of Jewish votes.
But Jews are famously well off. They are as successful as any small group has ever been as guests in a nation. Look at the percentage of millionaires and billionaires that are Jewish, it is enormous. You would think that people who are stereotypically wealthy and business owners would support the political party that is supposed to be pro-business. You would be wrong. Jews going back to early last century have traditionally been Democrats. Not only that but many/most of the groups that are virulently anti-White are run by Jews.
In the increasingly tribally divided United States, we don't have any allies. Some prominent individuals are on /ourside/ for sure but as a group it is everyone else against us. The question is why would this be the case despite what seems, on a surface level, lots of reasons for Asians and Jews (A/J) to be allied with Whites.
It comes down to a deeply ingrained sense of group survival. Along with basics like eating and having secure shelter, one of the most powerful evolutionary impulses is recognizing competitors. Another group that can take what you have or prevent you from getting what you want/need is a competitor and a threat to be neutralized or eliminated.
That is how A/J see Whites: as competition and therefore a threat to their group. It is not an individual level thing, it is a group versus group issue. That is why this Spring when black on Asian hate crimes were suddenly spiking, we got a slew of articles explaining why even though almost all of the attacks on Asians were committed by non-Whites, the real reason for those attacks was "White supremacy" For the good of the group, some individuals have to be sacrificed.
In the modern world, the struggle for global supremacy is really a three way race between Whites, the reigning champs, Asians, the rising contender, and Jews, who have never been numerically numerous but usually have power and influence that far outstrips their numbers. A/J seem to understand this, Whites have been convinced it isn't true. It is pretty handy for A/J to have their main competition unaware that they are competing.
A/J don't see blacks as competition. The very idea of that is laughable. Dangerous to individual A/Js sure but not a group threat. Nor do they view mestizos as competitors. They are useful as tools to undermine and weaken White nations and A/J see them as easy to control in a future world that they rule but they certainly never view them as equals or a real threat. If China could get away with it they would colonize Africa in a heartbeat and make the era of European colonial rule seem like Shangri-La in comparison. Despite numerical superiority, most of the world's population are at best passive observers to the power struggle that is going on.
Unwittingly to most Americans, the U.S. invited in two groups that have the intelligence and willpower to be a threat to our hegemony. A little over 50 years after opening the floodgates, we are on the edge of collapse and a global reshuffling of the power structure and it doesn't look good for /ouside/ with one notable exception that I will cover in a future post.
Things like shared cultural values are secondary to other groups who see the struggle as one for dominance, viewing us not as potential partners but rather as competitors in a game of winners and losers where the winners take all.
No one is on /ourside/ but us and we need to figure that out because we are losing badly in this fight and most of our people don't even know we are in a fight in the first place.
Posted by Arthur Sido at 9:00 AM