Who Will Keep The Lights On?

This is a very interesting exchange.

Wait until this happens to farmers...Jim Rogers predict huge rise in food prices many years ago...was he right? What is average age of farmer in USA, West Europe? https://t.co/fzqEcTByOm

Things are swell when the systems are working but sometimes systems don't work. There is so much in this country, from bridges to water treatment plants and from railways to power grids, that was built fairly long ago, by men who are either retired or dead and who have been replaced by computers programmed by Asian H-1B workers. Computers are fine to run an existing system but things break down or need to be replaced and the people who know how to do that are increasingly rare. Precision farming guided by GPS is cool and all but when you farm, machinery breaks and someone has to know how to fix it.
Let's look at an extreme example. The George Washington Bridge connects Manhattan and New Jersey. It is considered the highest volume bridge in the U.S. with an estimated 100 million plus vehicles crossing the bridge annually. It is one of those miracles of engineering, at 4,760 feet in length it is nearly a mile long and what is more amazing is that construction started in 1927, long before the computer and even before the electronic calculator. It is one of the most iconic bridges in the U.S. 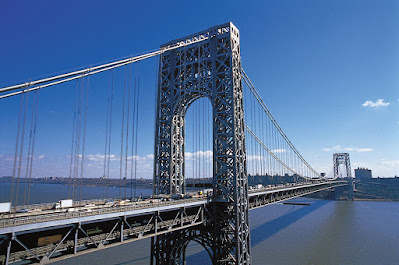 With modern math and engineering, far superior building materials and heavy equipment, such an undertaking today would seem impossible but in the early 20th century they did it anyway, starting in 1927 and finishing eight months ahead of schedule in 1931. In 1962 construction was completed on the lower deck. Think about that for a moment, the busiest bridge in the country was completed in 1962 when JFK was President.
Or closer to home, the Mackinaw Bridge connecting the Upper and Lower Peninsulas of Michigan opened in 1957, a nearly five mile long suspension bridge. Then of course there is the Brooklyn Bridge, built in (I didn't know this) 1883! Or the Golden Gate Bridge, built in in 1930s. The First Transcontinental Railroad was completed in the 1860s and I would guess that most of the railroads you cross today were originally built half a century ago. When was the last time you saw a major new railroad being constructed?
My point being that a great deal of the infrastructure we depend on was built a long time ago by people who are dead. Othmar Ammann was a civil engineer, born in Switzerland in 1879. He went to engineering school and then emigrated to the U.S. in 1904. He was the chief designer of the George Washington Bridge as well as several other bridges and the Lincoln Tunnel. That is what smart, ambitious people did in the day, they made and invented stuff.
The smart, ambitious people today don't design bridges, they design video games and social media platforms. Who wants to be a civil engineer making around $75,000 on average when you can design the next hot video game or personal electronic device? Or better yet be a Youtube influencer? I guess that is cool and sexy and all but having the latest iPhone isn't going to be useful if the bridge I am crossing collapses because no one knows how to fix it.
Politicians have been talking about our "crumbling infrastructure" for as long as I can remember and yet nothing is ever done about it. A big reason is that traditionally most infrastructure projects were just ways to siphon off tax dollars to politically connected groups who cashed in and never fixed anything. Now infrastructure is just another word that has been so mutated that it no longer has any real meaning. When "day care" is considered infrastructure on par with roads and bridges, as Senator Kristen "Dingbat" Gillibrand declared in April, it no longer has any meaning. Ted Cruz trolled his colleague on this silliness. 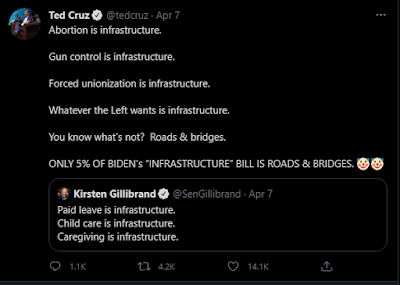 Infrastructure is just code for "pet social programs to funnel money to my donors".
It is a testament to the brilliance of American engineers that the infrastructure we do have is holding up as well as it is. It won't last forever and I really don't think we have the people to replace it when it breaks. We have lots of people who know how to keep the existing stuff running but...
Learning how to maintain something someone else built is not the same as building it yourself.
I can change the oil on a vehicle or switch out a flat tire. I know where the washer fluid goes and I have replaced headlights. That doesn't mean I can build a new car from the ground up.
This is already on display in places like Rhodesia and South Africa where the infrastructure built by Europeans is rapidly falling into disrepair. With the ongoing assault on the hard sciences by the forces of wokeness, it is inevitable that we will get lower quality engineers in the future and that doesn't bode well for infrastructure.
One of these days the lights will go out and we will discover there is no one around who knows how to turn them back on.
Posted by Arthur Sido at 9:48 AM