What Does Fair Have To Do With Anything?

No parent in America has not heard at least once, or more likely a million times, from their kid(s):
That's not fair!
Alternatives include "That's no fair!" or just "No fair!".
Likewise there are probably no parents, at least those 40 or over, who haven't replied....
Life's not fair.
It is an exchange we have all had and it is endlessly irritating for parent and child alike. But it makes some sense. Heritage Americans have a deep and abiding sense of the importance of fairness. We think that everyone should have a fair chance. That is why things like insider trading are illegal (unless you are in Congress), everyone should hypothetically have the same opportunity to research an investment and make a choice. If someone has access to information not available to the public, it isn't fair. When the New England Patriots were messing with the inflation on footballs, that wasn't fair.
It really depends on the situation. A child who doesn't get to stay up past their bedtime might think it is unfair but in that situation the parent has a responsibility to get their kid to bed at a reasonable time. On the other hand, in a sporting event fairness is very important. You don't have one team shooting a basketball at an 8' rim and the other team at a 15' rim, that wouldn't be fair but no one thinks it is unfair that some people are born too short to play in the NBA.
The same is true for a fight. When I wrestled in high school, I was in the 125 or 130 pound weight class so my opponent might weigh less than that but he wouldn't weigh more than that. Even a ten pound difference is pretty significant in wrestling. We were even weighed in by the ref so there was no chance of cheating. In boxing there are lots of rules, no hitting below the waist, no rabbit punching and they have weight classes as well. Those are sports and part of what makes sports enjoyable is the fair competition. When I wrestled someone else who weighed 125 pounds, the difference was in who was in better condition and who had better skills. It is also why everyone normal, non-insane person in America finds it revolting that a boy can claim to be a girl and then compete against actual girls where he has an overwhelming physical advantage.
But sports are not, contrary to popular opinion, the real world. In sports if you lose, your pride is hurt. In the real world if you lose, you could end up like Reginald Denny or worse. So what that means is that fair isn't part of the equation. When your life or the lives of your loved ones are on the line, there is no such thing as a "fair fight". There is only a fight you win or a fight you lose. 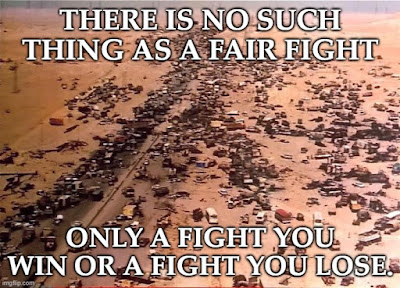 Maybe it wasn't "fair" to box in hundreds of Iraqi military vehicles and then blow the shit out of them from the air, but that is just tough crap. Play stupid games and all that. I am not a military tactician but I am pretty sure that an Iraqi tank blown up on the road isn't going to be shooting at American troops later.
My point is this, we need to abandon what we consider to be the rules of fairness. These people aren't trying to win $20 from us in a round of golf, they are trying to exterminate us and they have shown their willingness to do just that on multiple occasions through the last century. When what is coming actually comes, it will be tooth and nail time. The rules of engagement we have as civilians now? Out the fucking window. No need to go into details or scenarios but I am sure you know what I mean. If you threaten my family, all bets are off and nothing is off the table. Anything and everything, or as the limp wristed antifa faggots and low IQ bLM thugs like to say: by any means necessary. When they talk about BAMN, they are talking about you, more specifically killing you. That isn't a last resort to them, that is the preferred outcome.....
BLM Minneapolis: ‘I Don’t Want to Say We Need to Start Killing All White Folks… But… Maybe They Need to Feel the Pain and Hurt’ (WATCH)
Antifa Protester: "I Can't Wait Until Black People Lynch White People"
Or this guy....

Then he doubles down....

And keeps doubling down. 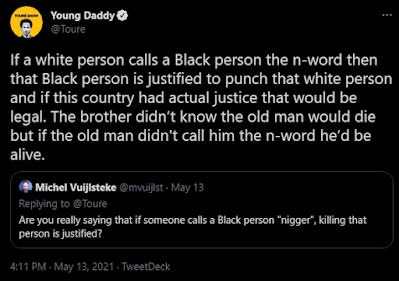 He isn't alone, I get this is unscientific "poll" but it rings true.

The old man who allegedly called this 27 year old a nigger is 77. Maybe he is a "racist" or maybe he has early stage dementia or maybe none of this happened but these people think that being called nigger is a completely justified reason to assault someone and if they die, who gives a shit because they were "racist". This account is still up and still verified even after multiple threads where he condones and I would argue encourages violence. If I posted that calling White people cracker is justification for beating a black guy to death, Twitter would nuke my account but not this guy.
Anyone with two brain cells understands that a 27 year old assaulting a 77 year old because he allegedly said nigger isn't reasonable force and that of course in almost every circumstance a 27 year assaulting an old man isn't a fair fight. On the other hand, how many videos do you see of fair fights? I am talking two approximately evenly sized and aged men having a one on one fight? Not very many but you sure see plenty of videos where people are sucker punched, where a man attacks a much older person, or a woman or a much smaller person or a single person is attacked by a group. That isn't fair and they don't care. The other thing to understand is that saying nigger is just the pretext, but at a deeper level many blacks and even a lot of Whites think that black violence toward White people is justified because of White supremacy/systemic racism or whatever bullshit, even if the victim hasn't actually done anything to deserve it.
I'll repeat it for the umpteenth time. Our greatest training challenge is not physical fitness or weapons training. Not to denigrate those as they are critical but the greatest challenge is changing our worldview and how we think about a lot of subjects. The Left has been slowly subverting our cultural institutions, from schools and Hollywood to churches and the Boy Scouts, for decades and one main emphasis was to stamp out the warrior spirit of the descendants of the Vikings, the British Empire, the soldiers on every side who fought in the World Wars, the people who explored and conquered the globe. They have done a pretty good job of it. We now live in a world where violence against our people is common but we have largely been convinced that we are the problem.
The days ahead are not going to be pleasant for anyone but for those who persist in the old ways of thinking, relying on the cops and justice system to protect them and thinking that the rules of fair play still apply it is going to be a hell on earth. At least for a very short time.
Get rid of the outdated notions. The 1950s are over and we find ourselves back in the world that our people inhabited for most of our existence apart from a brief period in the second half of the 20th century.
Fair play doesn't mean shit if you are dead.
Posted by Arthur Sido at 9:17 AM