You know that slogan the gun grabbing Left is always yammering about?
Weapons of war have no place on our streets!
And the usually unspoken second part:
Only the military needs those kinds of weapons!
Maybe someone needs to connect the dots for them....
US military guns keep vanishing — and showing up in street crimes
In the first public accounting of its kind in decades, an Associated Press investigation has found that at least 1,900 U.S. military firearms were lost or stolen during the 2010s, with some resurfacing in violent crimes. And that’s certainly an undercount.
Mostly they are rifles, which surprises me a bit. A Beretta M9 is pretty easy to smuggle out but an M4 is a different beast at around 30" and 6 1/2 pounds. You can't shove an M4 in your waistband, or at least you shouldn't. 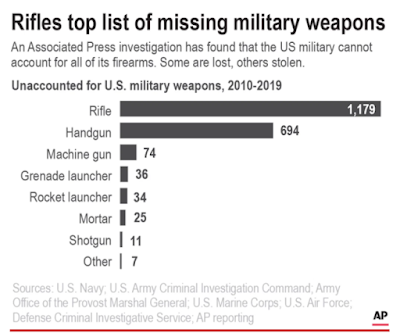 Although some of them were apparently AK-74s stolen by military police. Ironic.
I guess I will find the government's demand to keep weapons of war off the streets to be more credible when the government manages to keep their own (actual) weapons of war from ending up in the hands of gangs.
Posted by Arthur Sido at 3:09 PM