We Are Back To Braces. Again.

Our friends at the AFT are at it again. 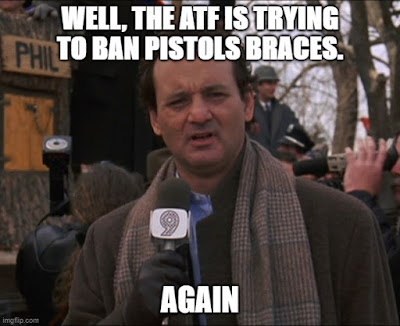 From the ATF today:
Factoring Criteria for Firearms with Attached “Stabilizing Braces”
On June 7, 2021, the Attorney General signed ATF proposed rule 2021R-08, “Factoring Criteria for Firearms with Attached ‘Stabilizing Braces,’” amending ATF’s regulations to clarify when a rifle is “intended to be fired from the shoulder.”
The proposed rule outlines the factors ATF would consider when evaluating firearms equipped with a purported “stabilizing brace” to determine whether these weapons would be considered a “rifle” or “short-barreled rifle” under the Gun Control Act of 1968, or a “rifle” or “firearm” subject to regulation under the National Firearms Act.
The whole thing is just dumb. Everyone knows that pistol braces are used almost entirely by people who are not disabled and are basically a buttstock. It is a game of semantics we have been playing between the firearms industry, the gun owning population and the ATF.
A 10.5" barreled AR pistol is not "more dangerous" than an AR-15 with a 16" barrel, and in fact is somewhat less accurate, especially at longer distances. But the braces are a way to try to get gun owners to voluntarily register their firearms with the Feds.
What will really happen is that people won't comply and won't register their AR pistol as an SBR (short barreled rifle) and instead will just stop worrying about the pistol braces entirely and slap their pistol uppers on a regular lower with a normal stock. Because it has one kind of plastic at the end of the buffer tube instead of another kind of plastic, you will now be a felon.
There is another 90 day comment period and by all means register your objections but with the occupational regime that is running our country today, I don't see a repeat of the December trial run when they withdrew the proposal.
Posted by Arthur Sido at 2:11 PM