This Is Why We Can't Have Nice Things Reason #5487

It is no wonder people are so freaking crazy given the industrial strength cognitive dissonance we are forced to endure everyday. We can print up "money" from thin air and shower it on people with no regard for having lifted a finger to earn it, but this won't cause massive inflation. Race is just a social construct but "Whiteness" is totally real and is the reason for every problem in the world. Someone can have XY chromosomes and be born with a penis but if they put on panties and eye liner, they are suddenly a woman.
Nowhere is this more stark than in how we are *supposed to* think about violent crime.
You might have noticed that I follow the news about mass shootings fairly closely. It is kinda my dark and probably slightly disturbing hobby, plus the media is desperate to hide these stories unless the right (White guy) shooter is involved so I do my part to point them out. Along comes a story about the Mistake On The Lake, aka Cleveland, Ohio. Things are at Spice Level Red Hot on the shores of Lake Erie.
2 mass shootings, 35 hurt, 3 dead: A weekend of violence adds to Cleveland’s increasing problem of gun violence
Yikes, that is Chicago levels of violence and Cleveland proper only has a population of 400,000 compared to Chicago's 2.6 million. I was a little shocked at how small Cleveland's population has become, it is in a death spiral.... 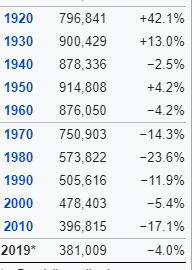 Then look at this chart and see if you can spot a trend that might explain the above chart....

It is a demographic mystery.
Anyhoo, the story is full of moronic editorializing from dipshits, like this person.
Toby Hoover, the founder of Ohio Coalition Against Gun Violence, said she believes the increase in gun sales show fear is a key contributor to the increase in violence crime.
“Whether it’s fear of a riot, or a march, fear of militia, fear of some other nationality, fear of COVID, it just puts everyone on edge,” Hoover said. “And all that needs is some kind of trigger for shooting to start. Fear and anger and access to guns is a recipe for disaster. And that’s what happened last year and has continued this year.”
Or gun sales are increasing because crime was already going up and people understandably wanted to protect themselves. I can speak from experience when I say that gun sale shoot up after there is a crime wave, not before and therefore increased gun sales are a response to increased violence, not the cause of increased violence. That sort of reason and evidence is usually meaningless to gun grabbers because they know damn well that legal gun ownership and gun owners in general are not the source of violent crime.
What really set off my bullshit detector was this from a different dipshit, one Daniel Flannery, who has a bullshit job as: "the director for the Begun Center for Violence Prevention Research Education at Case Western Reserve University". According to Danny....
Flannery said the lifting of coronavirus restrictions would provide more opportunities for shootings. More people will get together socially, at bars or family parties, and more people will go back to work and school.
“The next phase people are worrying about is the transition back to normal, people getting back together in large numbers,” Flannery said. “People were isolated because of COVID-19, and now they’re out and coming back together. It’s not good right now.”
Oh.
In a nutshell, the argument is that if we lift Covid restrictions, large groups will gather (they were anyway) and blacks will inexorably attracted to these gatherings where they will be forced by the genetic memory of Jim Crow laws and slavery to shoot other black people.
Pay no attention to the fact that there were mass shootings in record numbers all through 2020, especially when the entire nation was locked down.
Also don't notice that while everyone was locked down, only blacks seem incapable of not shooting up barbeques, funerals and birthday parties. White people, Asian people, even for the most part mestizo people, have responded to the relaxed lockdowns by going back to life as before. So have blacks, but in their case going back to normal means continuing to shoot each other.
It reminds me of the idea of punishing the entire class because of one kid misbehaving.
This Daniel Flannery dolt has an incredibly punchable face (not an incitement to actually punch him). 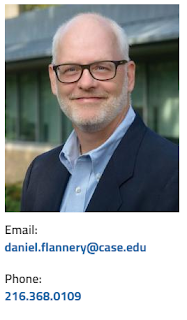 I included his publicly posted email and phone number from the photo on the Case Western website in case you want to drop him some fan mail.
The outfit he runs, the "Begun Center for Violence Prevention Research Education at Case Western Reserve University" is a pretty standard bullshit outfit apparently named after the same people as the Begun Foundation, listed as a "partner". The longer name is the "Semi J and Ruth W Begun Foundation". This is from their Guidestar page: 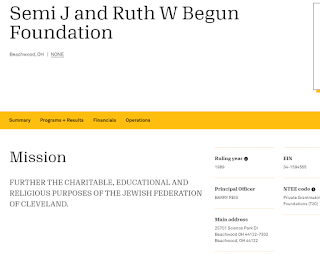 Yep.
Anyway, the Begun Center lists over 50 staff members along with director Flannery. I looked up Flannery's Curriculum Vitae and it is what I expected. B.A. in psychology in 1987 from Notre Dame, M.A. in Developmental and Clinical Psychology from Ohio State in 1987. PhD from OSU in " Clinical-child Psychology" in 1991. From there on it is a string of academic positions, professorships and working for "non-profit" anti-gun groups. The guy has never had a real job in his life, at least not since I was in middle school. He writes his little papers and does his little interviews and probably pulls down a nice salary from his air conditioned office but he doesn't actually do anything to combat gun violence.
That is the face of the gun control world. Dorky academics funded by The Usual Suspects™ whispering in the ears of low IQ politicians and panicking the uninformed voters. All the while the gunfire rings out in black and mestizo neighborhoods and everyone is stumped as to what is causing it but this is the party line from people like Dan.
Increased gun sales and little regulation in the gun industry led to widespread access to guns. Unrest due to high-profile police violence and some 15-months of the coronavirus pandemic caused has people everywhere on edge, Flannery said.
Little regulation in the gun industry? Come on by Danny and I will show you how "little regulation" there really is.
Gun violence is a perfect example of something I consider a truth to live by: more often than not the simplest answer is the correct one. Middle aged White guys buying a gun to protect their family is not causing gun violence. Women getting a concealed carry permit because they are scared to go into town is not causing gun violence. Lifting lockdowns is not causing gun violence.
Gun violence in America is something that is almost exclusively found in the black and mestizo community. This is on display in Chicago, a famously violent city:
There have been 289 homicides in Chicago so far this year. A whopping 8 homicides involved a White victim, or about 2.5% and only 2 involved an Asian. With 2.7 million people in Chicago, 31.7% White, that means than of around 855,000 White people in Chicago there have been only 8 murders in 2021. That is still 8 too many but that is one murder per 100,000 White people. There are a similar number of blacks, 32.9% or 888,300, but 221 blacks have been murdered in Chicago or 27 times as many as Whites despite a similar sized population.
Someone like Daniel Flannery or Toby Hoover would chalk that up to some mystical force like "systemic racism" but again the simpler answer remains the most plausible answer: some groups are just more prone to violent crime and solving disputes by shooting each other.
While most segments of the American population are generally law abiding and non-violent, the presence of a core group of people who respond to every slight with flying bullets makes this country less safe and holds back the rest of us. We all know who that core group is, even people like Daniel Flannery, but too few of us have the courage to point it out.
Posted by Arthur Sido at 12:00 PM