They Will Never Let Us Leave

The Military-Industrial Complex is never going to let the U.S. leave Afghanistan.... 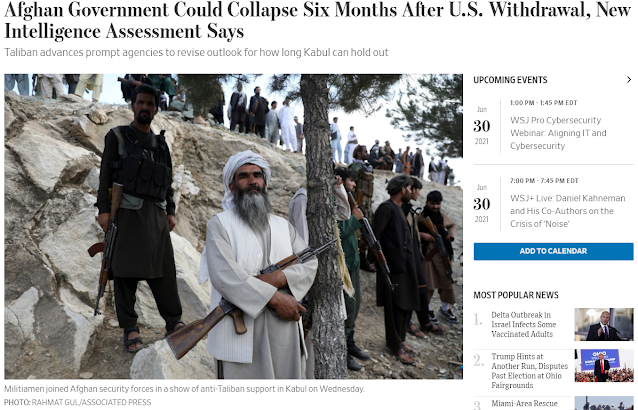 KABUL—The U.S. intelligence community concluded last week that the government of Afghanistan could collapse as soon as six months after the American military withdrawal from the country is completed, according to officials with knowledge of the new assessment.
American intelligence agencies revised their previously more optimistic estimates as the Taliban swept through northern Afghanistan last week, seizing dozens of districts and surrounding major cities. Afghan security forces frequently surrendered without a fight, leaving their Humvees and other American-supplied equipment to the insurgents.
How many billions in brand new U.S. military gear is going to basically be handed over to the Taliban? 20 years ago they were using left-over Soviet shit, now they get Humvees and who knows what else? We could have just airlifted a bunch of gear and some pallets of cash to Afghanistan in 2001 and stayed home, and we would have a lot of young men and women still alive and not maimed. Of course the puppet class is declaring that we really can't leave. 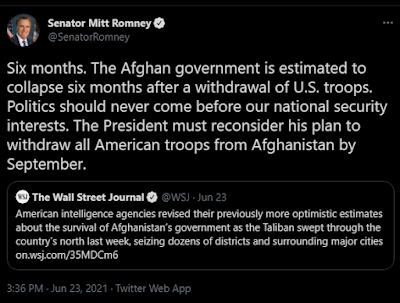 According to another article from the WSJ, the Afghan security forces have over a quarter million men who have been trained by the best military in the world and provided free state of the art gear but they are surrendering without a fight all across Afghanistan. If the U.S. is out completely by September 11th, does anyone think Kabul isn't in Taliban hands by the end of the year? We are about to see the Fall of Saigon 2.0 ....
The new U.S. intelligence assessment is creating more urgency among military planners to prepare potential operations to evacuate U.S. and other personnel should security in the Afghan capital deteriorate rapidly.
What was it all for? We invaded that shithole, killed a bunch of them, occupied their country for 20 years and now are fleeing before the last of our personnel gets slaughtered. Everything we "gained" over the last 20 years will go in the toilet and the country will be back to warlords fighting each other until the Taliban consolidates control. As a last kick in the nuts, we might get to bring some of Afghanistan home with us.
U.S. Rep. Seth Moulton (D., Mass.), a former Marine infantryman, plans to unveil on Thursday a detailed plan for evacuating as many as 20,000 Afghan interpreters and others who he said deserve special immigrant visas.
They always talk about the interpreters, who I imagine will be seen as collaborators and suffer an ugly fate, but you can bet that thousands of Afghans who can buy their way out will be coming to the U.S. where they will of course become great new Americans!
Mark it down, if we end up leaving Afghanistan the military will start making plans for the next invasion immediately, just waiting for some pretext to go back in.
In 2001 I came very close to entering the military to defend my country even though I already had five kids at that time. In 2021 I would absolutely forbid any of my kids joining the military and dying in some stupid conflict to enrich military contractors. A lot has changed in 20 year.
Posted by Arthur Sido at 5:15 PM