They Couldn't Predict How Fast It Would Happen

Saw a meme today that made me chuckle and then think. 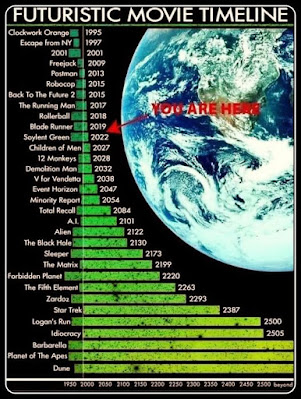 What made me go "huh" was the location of Idiocracy on this chart. The year 2505? Are you kidding? Best case scenario, we are 100% "Idiocracy as a documentary" no later than 2030.
Idiocracy was released in 2006, a scant 15 years ago. Even that recently it seemed preposterous that things would get that bad in only 25-30 years so they set the film 500 years in the future. On the other hand, 15 years ago they could still say "faggy" in a movie as an insult and get away with it.
Being marinated in the general stupidity and/or wanton ignorance of humanity in 2021, it is easy to forget how rapidly things have gone sideways in America since the turn of the century. I am not saying people were all geniuses in 2000 but it is plausible that someone like Mike Judge would think it would take hundreds of years for America to collapse to Idiocracy levels.
It has been 15 years and things are accelerating. Just imagine 15 years from now, what will it be like?