The Tragic History Of The Boers And A Lesson For Us

Great new video from Jared Taylor at American Renaissance.
If this gets nuked on Youtube, here is the original on Bitchute: THE HEROIC WHITE TRIBE OF AFRICA
The biggest lesson I took away from this video and what I already knew about the situation is this:
The only people who can conquer Europeans are other Europeans.
The British overcame the Boers. The combined forces of the West in Europe and America forced the end of White rule in South Africa. The aftermath has been predictable. When all of the celebrities and politicians were calling for the end of apartheid, none of them wondered if what would replace that system would in fact be better. Thus far it hasn't proven to be the case. In general, independence from European colonialism has been a net negative in most of Africa as nation after nation slowly devolves, many becoming permanent dependents of Western charity.
This isn't a argument for the return of colonialism. The last thing America or European nations need right now are colonies full of the same people who are turning America into the sort of places they fled from. But the lessons are still important and first and foremost is this:
The American people are about to become a minority in our own country and history tells us that we can never, ever surrender our firearms.
When the West defeated Japan and Germany, the West turned around and helped rebuild their nations. We can expect no such mercy from those who are going to inherit what we have lost through the self-hating masochism of our own people and the machinations of a hostile alien tribe we foolishly allowed to live among us. They see weakness as an incitement to violence and already the self-imposed weakness of our people and our refusal to take our own side in a fight has encouraged endless wanton acts of violence against us. What path forward can you see that doesn't mean a significant increase in this violence?
I am not 100% there yet but getting close to having my mind right about what must be done and what will likely be my fate to secure the freedom and safety of my people. Whoever or whatever you pray to, whether Odin or Jesus or some unnamed deity, let this be your prayer:
Lord, make me fast and accurate. Let my aim be true and my hand faster than those who would seek to destroy me. Grant me victory over my foes and those that wish to harm me and mine. Let not my last thought be “If I only had my rifle”; and Lord if today is truly the day that You call me home, let me die in a pile of empty brass.
In A Game Of Thrones, Tyrion is asked by Shagga of the hill people how he wants to die.
“...How would you like to die, Tyrion son of Tywin?"
His reply...
"In my own bed, with a belly full of wine and a maiden's mouth around my cock, at the age of eighty," he replied.”
That probably isn't my fate. I'll take this and be content. 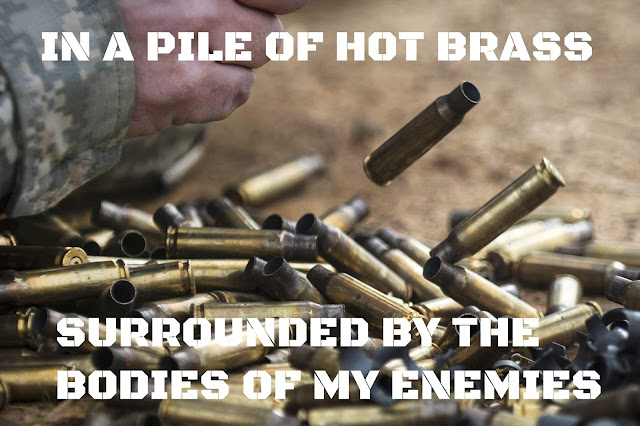