The Sithole Saga Gets Wackier!

Come on now....
Woman who claims she gave birth to 10 babies admitted to psychiatric ward
The South African woman who claims she gave birth to 10 babies at once has been admitted to the hospital for a psychiatric evaluation amid growing speculation over whether she was ever actually pregnant with decuplets.
Gosiame Thamara Sithole, 37 — who made headlines for the alleged record-breaking birth — was taken to the psychiatric ward last week at Tembisa Hospital in Johannesburg and examined by a medical team, South Africa’s Eyewitness News reported.
“The medical evaluation has shown that there was no pregnancy. It also shows that there are no physical scars to indicate a recent C-section,” a source told the outlet.
Her attorney, Refiloe Mokoena, said Sithole claims she is “now being held against her will” at the hospital.
The picture kinda looks like she has a giant ball under her shirt rather than a pregnant belly. 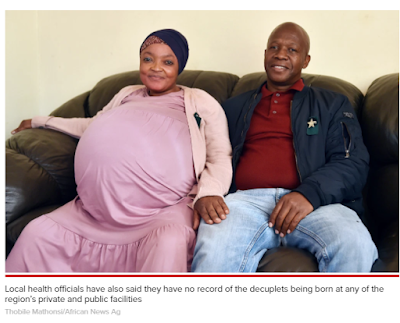