In a celebration of their freedom, won by White people, blacks in Chicago commemorated the sacrifice of so many brave White men by gunning each other down to the tune of 57 shot, 10 fatally, in Chicago.... 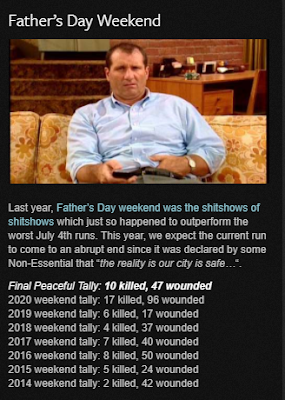 That is a huge improvement over last year with over 100 people shot on Father's Day weekend. Early estimates show 11 mass shootings around the country over the Juneteenth/Father's Day weekend, including one in Anchorage, Alaska of all places.
Let freedom ring!
Posted by Arthur Sido at 4:10 PM