The frozen folks in Buffalo, New York just basically elected an avowed socialist to be the mayor, one India Walton. 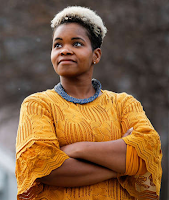 Hoo boy. A Commie black chick to replace a liberal black incumbent. According to Wikipedia, she got knocked up at 14, then had twins at 19 and got her GED after dropping out of high school. She is listed as a "nurse". All in all, she seems like a great choice to run a troubled city.
Sure it was just the Democrat primary but that is a one party town and I believe the Republicans didn't even bother to run anyone in their primary so the primary is a de facto general election. With a plummeting and darkening population, Buffalo is like many midwestern cities that are hollowed out as White people flee to the suburbs. At one time Buffalo was a city of well over half a million.... 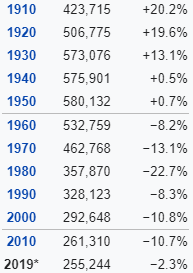 ...but that has dropped and the city now has less than half of popultion it did in the middle of the 20th century. Again, we see the same trend on race we see elsewhere like Detroit...

What is left is majority minority and with it comes the usual poverty and crime. Obviously when things are going badly, you should adopt the worst political ideology for a multicultural city you could imagine! Her platform is about what you would expect, exemplified in this headline:

Some of her genius ideas:
- Establish a civilian Traffic Safety Division to enforce routine traffic safety laws and remove police from routine traffic enforcement.
Oh, so the citizens of Buffalo are going to "enforce" the traffic laws. I am sure that will be even handed and effective.
- Create unarmed public safety detail to address quality of life and social calls to 911, freeing trained police officers to focus on solving crime.
Sending unarmed social workers to respond to 911 calls. I am sure that will also go great, because no one calls 911 when there is danger present. The cops can come in after your wife has been raped, you have been shot and the unarmed social worker was beaten to death to figure our whodunit.
- Invest in crime prevention strategies such as youth employment programs like Mayor’s Summer Youth, and crime prevention through environmental design.
I don't even know what crime prevention through environmental design means but the "basketball leagues stop crime!" is complete horseshit.
- Provide financial relief to small landlords in exchange for rent forgiveness for tenants.
In other words the city will basically pay the rent for tenants, which will encourage those tenants to simply stop paying and let the city take over. This chick is a genius!
- Establish Buffalo as an international destination for arts and culture.
If you have been to Buffalo, you know this is pretty unlikely especially since unarmed citizens are going to reply to 911 calls. "Come to see the art, stay to get mugged and assaulted!"
- Convert City of Buffalo fleets to electric cars.
Yeah....
- Prioritize small and minority-owned local businesses through the RFP process to increase successful bids for small, local contractors.
Really all of her "economic" plan comes down to "money for blacks and womyn"
- Work to establish a public bank. India will advocate for this at the state level, and ensure it is a priority to invest our city dollars in a public bank that invests in our community— not in fossil fuels or carceral institutions to make profits.
A public bank. That won't be abused by her political cronies or anything.
- Advocate for locally-sourced and culturally-appropriate meal options for all students.
Those "free" lunches are about to get really, really expensive.
- Support community-based initiatives to increase access to fresh and healthy food, including neighborhood-owned grocery stores, community gardens, and farmers markets.
When I think of inner city Buffalo, I think "this is a great place for a community garden!"
- Reduce speed limit on residential streets to 25mph citywide.
Wait, I thought that civilians were going to enforce the traffic laws, do you really think they are going to make people drive 25 mph especially since they apparently will have no actual authority to do anything to speeders?
You get the point, it is a laundry list of idiocy. She is a dumbass so I wouldn't expect anything different. We have lots of dumbasses but this one is now in a position to make her dumbassery the law of a decent sized city.
As always it is important to remember that idiots like this being elected are not the cause of the disastrous conditions of our inner cities but the result of demographic change. Cities don't go to hell in a handbasket because they are run by Democrats, they go to hell in a handbasket because of demographics which leads to Democrats being elected and in turn that just makes it worse. Again, as I have pointed out before, Vermont is one the most leftist states in the Union but it has very low rates of violent crime and a decent standard of living because it is one of the Whitest states in the Union.
Politics is downstream from culture and culture is downstream from and inextricably linked to race.
In the past this manifested itself mostly in cities seeing White flight and then black control which led to criminals and hustlers being elected as mayor. Detroit's Kwame Kilpatrick was the epitome of this, the guy was just a low life criminal who managed to get elected mayor and used his influence to funnel city money to his friends and family. Virtually every black political figure from Detroit is a crook. Ironically enough, Donald Trump commuted his sentence so he got out of prison twenty years early. Since Kwame can't run for office again, at least until 2033, he apparently now has decided to become a minister. That makes sense, the most lucrative grifts for blacks are being an elected official, or being a "community activist" or a member of the clergy.
Now we are seeing people like India Walton running for office on a socialist platform, no longer content to merely be grifters. I am sure there will be grift a-plenty but she is also trying to implement a slate of destructive policies that are certain to drive Buffalo deeper into the ground, drive out the remaining White people and encourage businesses in Buffalo to seek less insane pastures.
Buffalo is just the first of what I assume will be many large cities electing "democratic socialists". As ideas like defunding the police and unarmed public safety social workers responding to 911 calls gain traction, along with de facto socialized housing for all, these cities will accelerate the demographic trends that have led to widespread collapse in urban areas. This in turn will lead to more calls for "socialism" to instill "equity and justice". Rinse, repeat.
The only glimmer of light for the near future is that our cities are going to be such warzones that the Feds might be distracted from oppressing the actual American people for a short time, at least until they can force all of us off the land and into pods before building walls to keep us in. That is where we are in 2021, hoping for urban chaos to buy us a little breathing room.
Posted by Arthur Sido at 9:33 AM