Despite cooler weather and some rain, the denizens of Chicago did a bang up job over the weekend.... 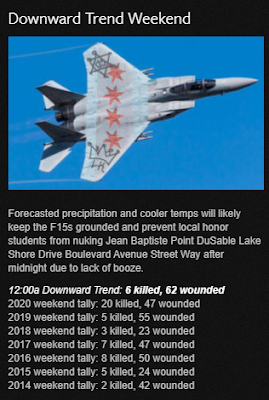 Very timely with the F-15 graphic from Hey Jackass!
That number will likely climb but thanks to a late mass shooting which often has more victims than initially reported. WGN is already reporting more than 70 shot in Chicago with a bunch at one time: 11 shot, 1 killed in Southwest Side shooting
The video is funny, the reporter starts to say "More than 70 people were shot..." but he catches himself and changes it to "More than 70 people were....fell victim to gun violence". You can tell he has had "say victims of gun violence" drilled into his head, that makes gun violence sound more like a natural disaster rather than the result of blacks shooting each other. According to the latest from WGN the toll is 73 shot, five dead. That is a lower than 7% lethal percentage which is awfully poor even by Chicago standards.
Considering that there was heavy rain in the Midwest this weekend, those are pretty significant numbers but hold onto your butts because this is Independence Day weekend coming up. The preliminary weather reports are pretty mixed, very cool weather but also not much of a chance for rain. 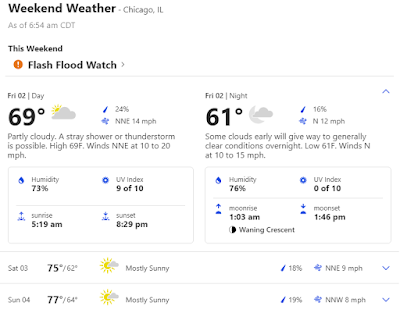 Perhaps the most unremarked but well known fact about "gun violence" is that the second greatest predictor of shootings, after race, is the weather. If we could figure out how to make the U.S. a lot cooler and rainier, gun violence would plummet. That is the sort of climate change research that could really pay off.
Posted by Arthur Sido at 8:14 AM