The government has a fun new acronym that might be the clumsiest ever: RMVE-WS
What is a "RMVE-WS" you might ask? It is a "racially or ethnically motivated violent extremist-white supremacists" according to this "news" story from WABC in New York:
'Perfect storm': Bulletin warns of extremist violence as pandemic restrictions lift
Ah yes, the old "White supremacists are planning attacks!" shtick coupled with "lifting restrictions leads to violence!" ploy.
According to this "law enforcement" bulletin:
Homeland Security officials also expressed fears about "the recent rise in mass shootings nationwide," noting that it "increases our concern for violence, particularly in advance of upcoming holiday celebrations and anniversaries associated with high-profile extremist attacks."
Didja catch that? They are worried about "RMVE-WS" mass shootings because of the spike in mass shootings since last summer but the problem with that is pretty obvious: there are hundreds of mass shootings in America each year but virtually none of them are from "White supremacists". Instead they are just garden variety black on black shootings, hundreds of them, but apparently not worth noticing from "Homeland Security", the most misnamed department in the Federal government.
What is the source of this concern by Homeland Security?
"As of 16 June, racially or ethnically motivated violent extremist-white supremacists (RMVE-WSs) were sharing downloadable links to a publication discussing targeting mass gatherings, critical infrastructure, and law enforcement officers."
Approximately 0.0% of that is true. If anything, it is more likely that ATF informants are sharing these "downloadable links", I guess PDF files?, with FBI informants. All of it is bullshit of course....
While no specific plot has been identified for Independence Day, the intelligence brief ominously notes that federal officials are seeing evidence of radicals -particularly white supremacists-and violence prone people- planning.
Well that IS ominous, if by ominous you mean hilarious. 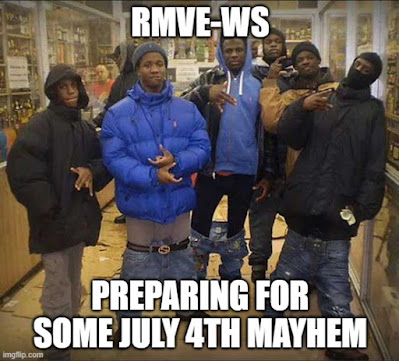 What is really going on is gaslighting by the Federal law enforcement apparatus, with the complicity and encouragement of the "media". No one is asking the hard questions or seeing any sort of evidence, we are just supposed to believe that these "downloadable links" are a smoking gun indicating imminent acts of violence. The article further says:
The official encouraged the public not to be in a panic mode but to be alert and to reach out to law enforcement if they see anything suspicious in the coming weeks.
This is simply encouraging jumpy White normies to rat on their neighbors if they maybe have a Gadsden flag or say something impolite at a BBQ.
We have heard this refrain of impending White supremacist terrorism based on "intelligence" over and over again this year, and it has never come to pass. The only thing close was January 6th, and that was a silly farce and clearly orchestrated by the FBI and others. The result is general slander of White people who don't like the idea of their country being occupied by an illegitimate and hostile regime, essentially claiming that we are the ones committing the mass shootings that plague our cities and saying we are planning on committing more, without the slightest shred of evidence. It is reprehensible and disgusting but that is what we have come to expect from the Lügenpresse and their partners in the Federal bureaucracy.
Every institution with any power at all in America is firmly lined up in opposition to you and your family. You want to see actual extremism and violence? Keep pushing*.
*not a threat or incitement to committing any actual violence
Posted by Arthur Sido at 1:29 PM