Being pro-life, or more specifically in my case anti-abortion, is a deeply held part of what makes me who I am. It is not coincidence that we have eight children of our own. I love babies. So what I am saying is going to be somewhat difficult.
Here is a story from Not The Bee, the "real news" outlet of the Babylon Bee that mostly runs funny, unusual or weird stories:
South African mom gives birth to TEN BABIES, passing previous world record of 9 set only last month 😱
The woman in question is Gosiame Thamara Sithole, a 37 year old from South Africa's Gauteng province. The amusing similarity between her last name and a term Trump used to describe many African countries is not lost on me.
Anyway, the Not The Bee writer was just gushing. This woman apparently already has a pair of six year old twins and now has an additional ten newborns to care for. Not to worry, she will have help at home...
Consider that the husband is currently unemployed, but is overjoyed by his truckload of new kids:
"I could not believe it. I felt like one of God's chosen children. I felt blessed to be given these kinds of blessings when many people out there need children. It's a miracle which I appreciate."
An unemployed father of 12 children aged six and under. A miracle!
One of the things that has changed in my general worldview is that while I remain anti-abortion and am absolutely pro-fecundity for my own people who are at a below replacement birth rate, I don't have an obligation to cheer when people who apparently have no means of supporting their children keep cranking out kids. This applies broadly to all of Africa and specifically to this woman. Her husband is unemployed and she lives in one of the poorest countries in the world, with a per capita GDP of around $5,500 which places it down near the bottom half in the world. Her husband is unemployed in a province where around 25% of adults are unemployed. She is already in trouble, as shown by a follow-up story that Not The Bee doesn't mention....
Exclusive: Mother of 10 babies who broke Guinness World Record appeals for help
Here are some choice quotes:
A Gauteng woman who gave birth to 10 babies – breaking the Guinness World Record – has appealed for help to raise the decuplets, saying she can’t afford the financial and emotional demands.
Sithole, who already has twins, said she had exhausted her savings after taking unpaid leave two months into her pregnancy earlier this year.
She ruled out going back to work, saying her salary would not even cover the costs of the helpers she would have to employ to take care of her bundles of joy. Her immediate needs included clothes, baby formula, diapers and accommodation for the decuplets. “I appeal to the public to help me in whatever way they can. Anybody who has anything I would appreciate it. I am relying on my mother-in-law now. She is old, lives on her old age pension and has grandchildren. I will also need people who can volunteer to help me raise the children – helpers,” Sithole added.
Wow, what a blessing. The Not The Bee writer said:
One of the things that continues to strike me is how most of the world (unlike America these days) sees numerous children as a blessing, even when faced with the daunting task of changing a billion diapers a week.
It isn't getting help changing the diapers, it is simply not having money to buy any diapers in the first place. They might get some help now because their situation is noteworthy, and likely mostly from White evangelicals in America, but what about in six months when it isn't news anymore and the babies are bigger and still need changing and food and clothing?
Once the news stories stop, this blessing will likely turn into a nightmare. Taking care of 8 kids spread out over a decade and a half was no picnic but I had good jobs for most of that time. My wife stayed home to care for them while I worked. Having 12 kids aged six and under? No one is prepared for that.
We have been subsidizing this for decades. In a natural environment this woman probably doesn't make it full term. Her kids probably starve right out of the gate. Her unemployed husband is long gone impregnating someone else. People who are dumb or lazy die out. Instead we have a world where people who are dumb and lazy get propped up and encouraged to have more kids while the smart and capable don't have children because they think they can't afford kids. No wonder I think Idiocracy in 2021 is more documentary than dark comedy. 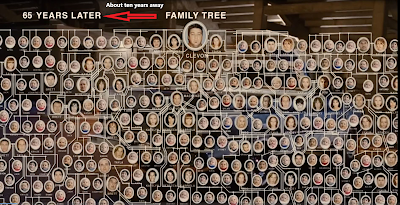 My main emotion on seeing this story of Gosiame Thamara Sithole is grief because I know how this is almost certainly going to play out. No one is blessed by this event and trying to pretend that it is only makes one seem naïve and perhaps even a little cruel.
By contrast I brought a young Amish woman home with her new baby last night. It was her first baby and that is always a huge challenge for anyone. But this new mom comes from a family of twelve and she has been preparing to be a wife and mom from birth. She has cared for her own younger siblings helping her mom and then in turn helping her older siblings with their own kids. She learned to cook and keep house and work hard. I have known her oldest sister for a long time and I knew this young women when she was in her late teens and single. I was there when she went on her first date with her future husband. I spent a lot of time helping her get ready for her wedding and now I have been patiently waiting for the day when she would have a baby of her own. Her husband is a little older than her, in his mid 20s, and he is working with his brothers in a business started by his grandpa. The kid pulls down really good money and has been banking it for years, ever since he got out of school and started working full-time after 8th grade. That couple is as ready as anyone can be to have a baby and has an enormous support system in place to give that baby every possible chance to grow up to be a happy little girl.
The difference is enormous.
There is nothing especially noble about cranking out babies one after another if you are unable or unwilling to care for them. My wife and I volunteered at a crisis pregnancy center that encouraged women who found themselves pregnant unexpectedly to keep their kid, offering free diapers and formula if they would show up to parenting classes. Inevitably in these classes, they would sit and stare blankly at us while watching the time and then get their free stuff. Most had smart phones, tattoos, some gold teeth and smoked so clearly they had disposable cash for some stuff. Looking back I think most of them saw us as suckers, they sat there for an hour and got $50+ worth of diapers and formula so they wouldn't have to spend their own money. It is likely that many of the kids we helped subsidize will be right back in the same crisis pregnancy center when they get older because we subsidize and encourage a cycle of dependency.
Abortion is murder. Pure and simple. But we need to maybe rethink what being "pro-life" means because if the state of the world teaches us anything, it teaches that encouraging people to have babies who can't or won't take care of them is not praiseworthy. You don't have to be rich to be a parent, we were dirt poor for many years when we started having kids, but our kids grew up in a stable home with both parents and were loved and provided for. Unwed mothers were rare years ago because no one pretended it was noble but now we act like having a dad around is just an unnecessary factor, rather than the single most reliable predictor of a future life of poverty and dependence.
It is time to move past Veggietales level thinking and time to get real about the world as it actual is, not how we dreamily wish it were. That is hard for me to say but it is the truth that needs to be said.
Posted by Arthur Sido at 11:00 AM