This twitter thread is absolutely fascinating. I will let you delve into the mostly illiterate "yass kween" replies but here are the tweets themselves. 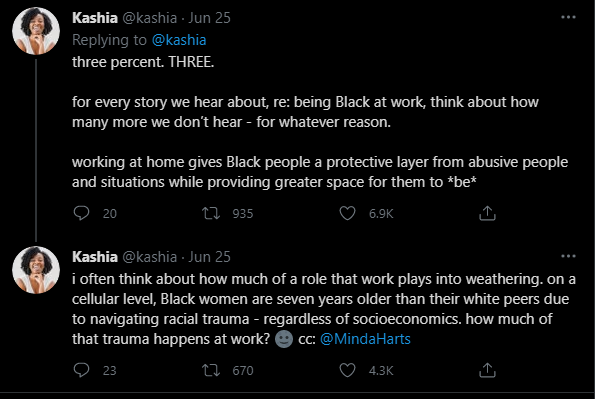 My first though was that the reason likely wasn't "racial trauma"...

The comments are hilarious and disgusting at the same time. What it basically boils down to is this:
If you have a black person in your workforce, everything you do needs to be adjusted to catering to their every whim.
Lots of comments about "microaggressions", as if blacks are the only people who have to deal with irritating co-workers. Comments about White women touching their hair. One bitching about the thermostat because only the comfort level of black employees should matter. All of the well known and widely documented indignities we all have dealt with working in an office environment, captured in Dilbert and Office Space, but when you force feed a segment of the population with an endless stream of racialist sewage, you get people who really believe that their plight is different and that they should be treated with kid gloves at the expense of everyone else.
Call it racist or whatever you like, but reading that thread should make any manager think long and hard about whether it is worth it to hire a black person, especially a black woman.
Outside of government offices in larger cities, I assume blacks are a small percentage of the office staff in most places. In the giant corporate complexes I have worked in, there just weren't all that many and the blacks we did have working in my peer group were pretty decent people, mostly because they didn't freak out over every perceived slight. We were professionals managing accounts with hundreds of millions in assets and that demands a certain minimum level of decorum.
Anyway, if you are in a hiring position and you see a resume with the name Qu'anishia come across your desk, maybe that one accidently gets lost.....
Posted by Arthur Sido at 10:48 AM