The mass shootings come with such regularity that it is almost impossible to keep up with them. On May 22 there was a significant mass shooting in North Charleston, SC with 14 people wounded and one killed, a 14 year old black girl named Ronjanae Smith. 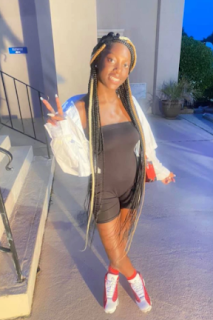 The story goes like so many others. There was a party of some sort with mostly blacks, dubbed an "illegal concert" and as is so often the case when you get that much diversity together, things went sideways...
Cops said members of the two rival gangs saw each other at the event and opened fire, killing the 14-year-old girl in the crossfire and wounding 14 others.
All four alleged gangbangers — Malachi Wigfall, 18; Tye Robinson, 18; Tyquan Denard Cooper, 21; and Manqual Laval Horlbeck — were taken into custody over the course of the day on Thursday, police said.
That seems like a reasonable response. I often see people I don't care for in public, the difference is that I don't feel the need to start shooting into a crowd in response. Something about impulse control....
Here are the four arrested for the shooting 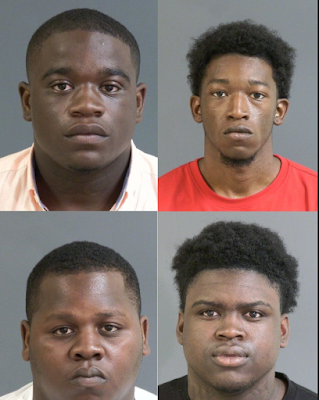 The top left guy is "Tyquan", a 21 year old. The other three range from 20 to 18. The boys are looking at the better part of the rest of their lives behind bars, although they are apparently charged with manslaughter instead of straight murder. All four of them have significant prior legal trouble and in a weird but not totally unexpected twist....
Speaking to how close-knit the Deas Hill community is, Sinclair said at the bond court hearing the crime was particularly difficult to bear because Cooper is Ronjanae’s half brother.
Nice!
Katrina Sinclair is the mother of Ronjane Smith, it can be hard to tell sometimes as often most of the kids have different last names from each other as well as their mother.
Also it is always weird that one of the first thing parents of murdered blacks prioritize is getting t-shirts made up with pictures of their deceased loved one. This is the girl's mother Ms. Sinclair. 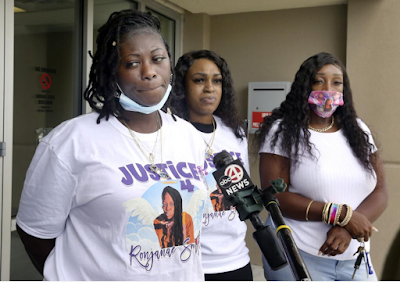 It is probably cruel and inappropriate but I wonder if she second guesses her decision to get knocked up by the same guy who knocked up Tyquan Denard Cooper's mama 7 years earlier, eventually culminating in her daughter being shot by her half-brother?
The hits just keep on coming. According to Heyjackass! there were 18 people shot in Chicago on Friday and overnight, 4 of those are dead and as the saying goes, Saturday night's all right for fighting, so I expect lots more with temps in the windy city looking to hit 90 degrees today. There are already 278 homicides year to date in Chicago and the victims seem to have something in common....

221 blacks murdered year to date in a single city, presumably all by other blacks. The total body count across the country is certainly well into the thousands at this point. What is the Usurper Joe doing about it? Rather than facing the current crisis happening right now, he is wailing and rending his garments about the "race war" in Tulsa, Oklahoma  a century ago. A few hundred dead blacks in 1921 seem more important to Joe than a few hundred blacks dead in 2021.
It is another example of what is often said, the demand for "racism" far outstrips the supply so the race hustlers have to constantly live in the past where slavery ended just last year, Jim Crow laws are alive and well and blacks are in constant fear of being lynched. Gregory Hood at American Renaissance does a masterful job as always of debunking the Tulsa myth: The Tulsa Libel
Remember kids, widespread violence and civil unrest is a feature, not a bug, designed to help usher in the authoritarian state to implement the Great Reset.
Posted by Arthur Sido at 12:26 PM