Nothing to see here folks:
Consumer prices surge 5% annually, most since August 2008
No big deal, even though they are desperately trying to hide how much inflation is going up. Hell, the Secretary of the Treasury for the occupational government, Janet Yellen, says the inflation is good news for America!
Yellen Admits Inflation Is About To Surge, Says It Will Be A "Plus For Society"
So, scrambling to preempt the barrage of questions come Monday, on Sunday Janet Yellen said that even though inflation is now at the highest level since Paul Volcker hiked rates to 20% and the US is about to issue another $3 trillion or so in debt just to fund existing stimulus programs, Joe Biden should push forward with his $4 trillion spending plans even if they trigger inflation that persists into next year and higher interest rates.
Why? Because soaring inflation is good for you.
“If we ended up with a slightly higher interest rate environment it would actually be a plus for society’s point of view and the Fed’s point of view,” Yellen said in an interview with Bloomberg. And yes, she really said that.
It wasn't immediately clear why rising rates, hence inflation and a drop in one's purchasing power is "a plus for society's point of view" but needless to say, this is the kind of idiotic drivel that Rudy von Havenstein and his cronies said some time in 1921, just around the time Weimer hyperinflation kicked in.
This is a helpful graphic to reference what a positive force inflation will be: 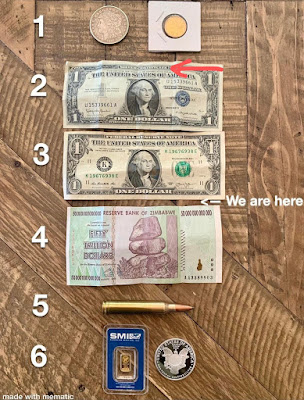 I have been saving that graphic for just the right occasion! Me, I am banking on stage 5.
Yesterday I talked to a guy who runs a small manufacturing business locally and he was telling me how much his raw material prices have gone up, not just for this year but by a TON for next year's projections. He is passing on those increased costs to his customers who in turn will pass them on to their customers and it will keep snowballing until it hits retail consumers. I am not talking a buck or two.
Our economy is about six months away from being run by a midget riding a retarded guy.