Earlier I mentioned the mass shooting in Texas that left 13 people wounded: Things Really Are Bigger In Texas The number of victims might be 14 now, I am not sure if that is official yet.
I took a screenshot of a news report that provided a brief description of the shooter as a "skinny" black male with "locs-style" hair. I assume that is slang for dreadlocks? Anyway, not a great description but is certainly helps to narrow down the pool of suspects somewhat and since Austin has a relatively small black population, a skinny black guy with dreads is mildly helpful. Apparently it is also racist to provide a description, according to the Austin American-Statesman. Screengrab from around 4 PM EST.... 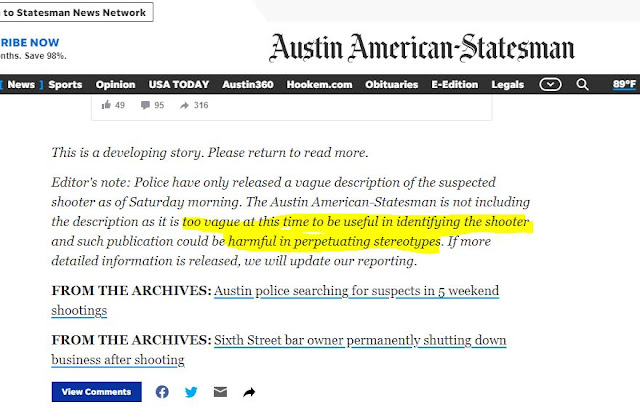 Hat tip to Scott Greer.
Think about this. Rather than providing a description of the suspect which might help track this person down, the Austin American-Statesman is instead suppressing this information because it might "perpetuate a stereotype". Have they considered that this stereotype exists for a reason? That reason being that the shooter in these cases is almost always a black guy?
The cops have one suspect in custody, I wonder if the Statesman will publish a picture of him or give his name, or might that also perpetuate stereotypes? Regardless it is clear that the Austin Statesman would rather a black man who shot up a crowd of people escapes justice in order to avoid reinforcing the fact that we all already know: black men shoot a lot of people.
This is the state of the Lugenpresse in America. I assume you already knew that.
Posted by Arthur Sido at 4:24 PM