Hot Times For The Homies

Time for the Monday round-up of the weekend's violence.
As expected things are back to normal in Chicago. Warm weather and clear skies = guns a'blazing. According to Heyjackass! the Windy City saw a more expected weekend of shootings.... 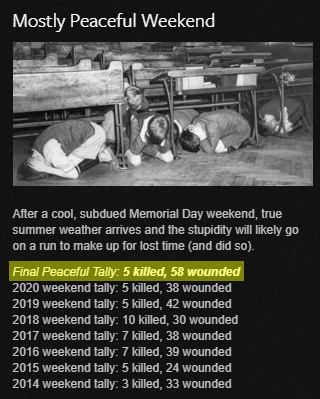 63 shot, 5 dead. Compare that to the same weekend dates in prior years and it is a big jump, even from last year with "only" 43 shot and 2019 with 47 shot. The marksmanship isn't getting any better. I am not sure what happened in 2018, while there were just 40 people shot, 10 died. A 3-1 wound/kill ratio is pretty unusual. Regardless, it was a very violent weekend in Chicago, aided by an 8 person mass shooting...
Mass shooting on South Side leaves 8 injured in Burnside neighborhood, officials say
No description of the shooter. Meanwhile Chicago is up to 558 carjackings for the year and of course the two all-important metrics from Heyjackass! 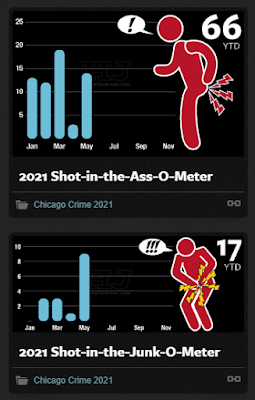 17 people shot in the junk this year already. Maybe the homies can skip another gold tooth and get a holster? Or at least learn to not grab the trigger when hiking up their saggy pants?
Chicago was of course not alone in having a violent weekend.
'It's gotten worse': New Orleans East demands answers after shooting at party leaves 8 hurt
The local news interviewed the man who organized the party, targeted at "teens", who seems shocked that a large gathering of black teens resulted in gun fire. Who saw that coming? 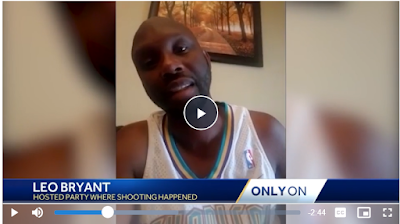 This genius has a party with minimal adult supervision, aimed at "teens" that apparently was going on late at night. The party turns into a shooting gallery so of course he wants to have another party when "things settle down". Shrewd move Leo!
Then we move to Miami, hard on the heels of Chicago as our leading urban warzone.
Three dead in Florida drive-by, week after area’s last mass shooting
Reports as of this morning are saying 9 total shot in the drive-by, 3 dead including one Tyleisha Taylor who was a corrections officer.
This didn't happen over the weekend but still warrants notice....

NEW: We've obtained surveillance video of the brutal assault. It shows the large man getting out of his car, walking up to the woman as she pumps gas, then, without provocation, he sucker punches her in the face and continues to beat her on the ground. She was hospitalized. pic.twitter.com/1b3fOq33QG

Big black guy, little woman, knocks her down and then continues to beat her to a pulp. I don't understand how she just stood staring at the pump while a shirtless lardass strolls right up to her before popping her. This is why so many of us talk about situational awareness, if you see someone fitting that description walking directly toward you, you should be prepared to defend yourself or flee but getting popped in the head while you aren't paying attention is a great way to end up in the hospital or morgue.
Wherever you look, the story is the same and promises to get worse as the summer approaches.
Posted by Arthur Sido at 1:18 PM