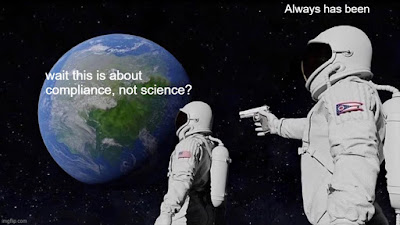 Having established that the Federal and State governments can arbitrarily force people to stay home and when they do venture from their homes require them to wear silly little paper masks, the next step will be a new and better round of lockdowns based on everyone's favorite crisis: "climate change". Tucker Carlson had a guest on to talk about this:
A second wave of lockdowns based on climate change, something that has been happening to one degree or another ever since the world has had a climate, is even better. No need to keep pushing inflated stats of people who are infected or who died with Covid, now the "threat" is something so amorphous and intentionally impossible to define as "climate change". Covid was just a sideshow, a trial run to see if people would allow themselves to be imprisoned in their own homes and it worked. Now the real show starts.
Remember that our doddering dictator and his hyaena laughing sidekick are just puppets. The brains behind this are pulling the strings and they have the plan. It is all coming together. Gun control to disarm the non-compliant population. Massive inflation creating a cycle of ever deepening dependence on government payouts. Lockdowns and the creation of a culture of unquestioning compliance. Forcing everyone to move into pods in violent cities while billionaires gobble up all of the land. A globalist governing shadow government who will control the world's economy. And of course the primary goal, a new technocratic aristocracy who live like kings while the rest of the world lapses into a state of servile peasantry.
It is not about coronavirus. It is not about the climate. It is all about control.
Posted by Arthur Sido at 7:41 AM