Even More From The "Why We Can't Have Nice Things" Files

The Austin mass shooting featured a typical slackjawed specimen, one Jeremiah Roshaun Leland James Tabb, aka "JT" and an unnamed juvenile who is 100% another black kid. 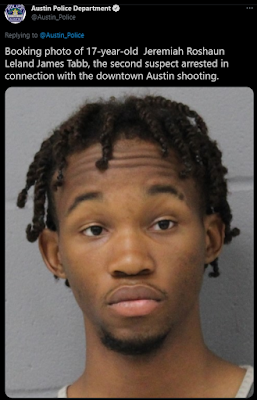 The national news dropped this bitch like a hot tater but a few local news outlets are still doing some coverage, including this:
Police: Fatal Austin mass shooting arose from a teenage feud
The male juvenile, who was not identified by name, said he had attended the same Killeen middle school as JT, who said to the juvenile’s group, “What y’all wanna do? Y’all wanna fight?” The juvenile said he answered, “It’s whatever,” at which point JT pulled a handgun from his waistband and opened fire. A companion of the juvenile, also a juvenile, drew his own gun and returned fire. One person was killed and more than a dozen others were wounded.
With the words "It's whatever", a 17 year old opened fire and a different teen returned fire, wounding over a dozen people and killing a man from Michigan. Now he goes to jail for most of the rest of his life, and a family buries a man who was just in town for a visit and went home in a coffin.
When I was in high school, and this is probably true for everyone who reads this blog, there were kids I didn't like and who didn't like me. Sometimes we would stare at each other or exchange testy words but usually nothing came of it. On occasion there would be some shoving and rarely an actual fight. Never in a million years would one of us have been carrying a gun, much less used it. It wasn't like we didn't have access to them, my dad had guns and I had the ability to get them out if I wanted to but it never crossed my mind to take a gun with me to an outing with my friends, much less to shoot into a crowd because someone was staring at me.
However in the spirit of full disclosure, we did have one incident in the 80s when a student brought a gun to school with the intent of shooting another student. He also happened to be one of less than 4 black kids in the entire school system, who had gotten his ass kicked by a big White football player so he was going to shoot him. Of course, what else would you do in that situation? They caught him, arrested and expelled him before anything happened.
Millions of people emboldened to murder each other over the slightest provocation and a society that is not allowed to notice, much less talk about it. How can this end well?
Posted by Arthur Sido at 8:00 AM