Today kicked me around, was in the car from about 5:45 AM until a little after 5 PM. Included a lovely sojourn through Detroit, south to north, and then north to south. It is always a gentle reminder, like a kick to the junk, of what was lost for the sake of diversity. A once proud city turned into a giant shithole. An 83% White city of over 1.8 million people in 1950 to a city of maybe 650,000 that is around 80% black. And boy can they drive! I went through one little mess on I-94 with a multi-vehicle bad accident on the other side of the highway, and then about 100 yards further what looked like almost certainly a fatal crash on my side of the road. Simply delightful.
Anyway I was listening to a podcast from The Zman titled The Myth Of Democracy. Pretty good show, very thought provoking. I'll link the player below. Anyway it got me thinking because he brought up two subjects, abortion and "gay marriage".
The endless pissin' and moanin' about the Capitol "riot" / "insurrection" is framed as an attack on our democracy and that is just about the worst thing that could ever happen according to the Left. Our democracy is the most important part of our country.
But wait a second. The two signature issues of the Left, abortion and "gay marriage", are not the result of democracy in any sense.
We have never had a national vote on abortion and in many states the voters have repeatedly voted to restrict abortion to one extent or another only to have the democratic will of the voters thwarted by the courts based on the Roe v Wade and Planned Parenthood v Casey decisions. In a democracy shouldn't the voters get to decide on issues, especially the most serious ones like abortion?
The same with "gay marriage". A few states decided to recognize them, a lot didn't but thanks to the Obergefell v Hodges decision "gay marriage" became the law of the land. Again, Congress didn't pass a law to recognize that a couple of fags wearing wedding rings could claim to be married and most states didn't want it either but prest-o, change-o! and the SCOTUS whipped up a right for fudge packers to play house and get tax breaks to go along with it. That isn't democracy either.
I guess democracy as a concept is what they were protecting, not the actual function of people making their will heard. As The Zman put it, we have elections but we don't have democracy under any reasonable definition. What we mostly have is a kritarchy, an imperial judiciary that makes laws and rules without any real recourse, on the one hand and a vast army of court mandarins we call Federal bureaucrats who take vague laws and create from a line here and a paragraph there an enormous array of capricious and arbitrary laws. In fact, defending the Capitol building was the least effective way of protecting what we call "democracy", the troops should be guarding the Supreme Court and the various administrative offices housed in enormous, hideous granite buildings. 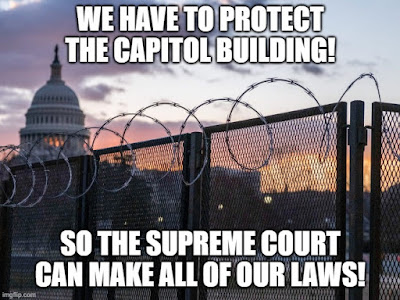 Anyway, that is all I can muster for today. Heading to bed before 8 PM cuz I am a wild man.
Listen to "EP 190 The Myth Of Democracy" on Spreaker.
Posted by Arthur Sido at 7:52 PM