Domesticated To Dangerous Is A Short Walk 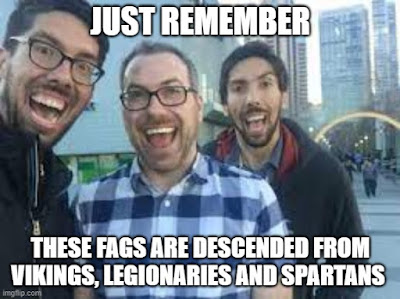 Big Country Expat did another taste test of MREs, this time from Putin's people: More Russian with a Stove Test and Steaks
Interesting and all but he said something at the end that I think bears repeating again and again.
OPSEC: Smell.  That's a issue.  Keep it in mind Aye?
Starvation makes people into dangerous people.
THIS more than anything is why worry.
We live in a very tame world. As long as you stay clear of blacks and mestizos, you are living in as safe of conditions as any humans have lived in for all of our existence. Everything is designed to keep you "safe". You don't have to worry about water. You don't have to worry about food. You don't have to worry about dangerous animals (unless you live in the swamp we call the American south). There are no pirates attacking our local shipping, no bandits attacking caravans, no desperados robbing stagecoaches or trains. Life is overly easy and absent any challenge, people have become soft. Look around in public, especially in suburban areas, and see how many men in their 30s and 40s are fat and meek. They wear superhero or Star Wars t-shirts and seem terrified of their women, if they have one around. They are disgusting.
They are also very dangerous.
In an extended SHTF scenario, once it is apparent that the authority structures have collapsed, people are going to very quickly revert to their baser nature. I am a law abiding guy, never been in trouble with the police other than a few traffic citations. I haven't hit anyone in anger since high school. However, if the choice was between someone hurting or stealing food from my family and me shooting them dead? I shoot them dead. For that matter, if I had to feed my kids and wife because they were starving, there isn't anything off the table. Nothing.
That overweight, pasty 36 year old White guy wearing the Captain America t-shirt over his fat gut? If things got desperate you will be shocked to see how quickly he turns feral. Most of them won't live long but a lot of them will and the thin veneer of civilization that keeps us in check will wear off pretty quickly. For men right now, when they have a wife and then a kid, their focus is on good schools and saving for college and a trip to Disney. Change that focus to feeding their child and protecting their wife and the old man will start to emerge for many of them. Again, not all or even most, but a lot. A few generations ago men like these were still building America, and a few generations before that they were winning the Wild West and conquering the globe. Those genes are still inside them, trapped under layers of soy and carb based fat, but there nonetheless.
It will be a fatal mistake to assume that the way people act now is how they will act if things go sideways. How well do you really know the people around you? Bob the guy down the road who you wave to casually if you see him mowing the lawn might be fine as long as the lights are on, but if they go off and stay off are you confident Bob won't be thinking about the canned food he suspects you have squirreled away?
In a lot of ways, the urban areas are less dangerous because we know damn well that the diverse populations will chimp out at any provocation so we stay clear of them. The dumb White people who stubbornly keep living in the cities will be raped, dead and probably eaten very quickly and then Daquandro and Jose will devour each other. Your neighbor, the nice White guy who votes Republican and attends a generic evangelical church? You might not realize who he really is until he is coming through your door. As is usually the case, the obvious danger is less dangerous than the threat you don't see until it is too late.
This is why it is important to build relationships now. Figure out who you can rely on and who is prepared for something bad. We have a neighbor that is better prepped than we are, he isn't going to run out of food in 72 hours and come looking for ours. Some others in the area, I am not as sure about.
Don't make the mistake of assuming that a lifetime of conditioning will mean much if things really get crazy. A suburban guy wearing cargo shorts and a polo shirt with starving kids is every bit as dangerous as some thug with his pants falling down.
Posted by Arthur Sido at 8:26 AM