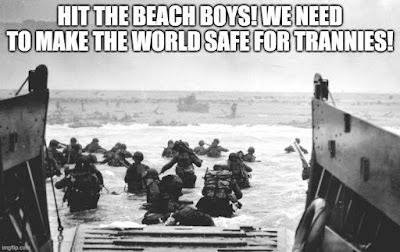 June 6, 1944
D-Day
The greatest military operation ever conducted (arguably). Tens of thousands of soldier and sailors descended on the coast of France by sea and by air. Men charged out of landing craft into withering machine gun fire. Other men jumped out of planes to land in a country they had never stepped foot in. Some really brave/foolhardy/freaking crazy men got into gliders with no engine and were towed into French airspace and cut loose to basically crash into the ground. But hey, they got paid a little extra.
The instances of extreme bravery are too many to count. On all sides. Russians fighting for a brutal, vicious dictatorship but really for Mother Russia. Germans in the Wehrmacht fighting for the Fatherland. Brits fighting to defend the UK after years of losing. Americans fighting to free Europe from totalitarianism, at least one flavor. At least that is what they thought they were fighting for.
I have been reading the Stephen Ambrose book Band Of Brothers: E Company, 506th Regiment, 101st Airborne: From Normandy to Hitler’s Eagle’s Nest. It was first published in 1992 and that means it was published in a very different country from today. The book became the inspiration for a very well made miniseries on HBO. I have watched the entire series multiple times but never read the book so I am working on that now. It is interesting how my perspective on the events of the miniseries have changed by reading the book and by the passage of time.
Millions of young European men were armed and trained and then launched to slaughter one another by the hundreds of thousands. They had no natural animosity toward one another but they were convinced by the most powerful and wealthy in the world that they should hate and kill one another, driven by dehumanizing propaganda. Why should an Iowa farm boy want to travel thousands of miles to a continent he had never visited to kill a German kid from Bavaria? There is no reason for them to kill each other. At least the Japanese were a very foreign people of a different race who had attacked America, again at the urging of their own powerful elites. But Germans? An awful lot of Americans have German ancestry and ties to Deutschland. I learned a bit from the book about how this played out for the men who were really there.
There were a few quotes that stood out to me like this one:
The story ends up thus: wonder of wonders, the average G.I. found that the people he liked best, identified most closely with, enjoyed being with, were the Germans. Clean, hard-working, disciplined, educated, middle-class in their tastes and lifestyles (many G.I.s noted that so far as they could tell the only people in the world who regarded a flush toilet and soft white toilet paper as a necessity were the Germans and the Americans), the Germans seemed to many American soldiers as “just like us.”
Ambrose, Stephen E.. Band of Brothers: E Company, 506th Regiment, 101st Airborne from Normandy to Hitler’s Eagle’s Nest (pp. 248-249). Simon & Schuster. Kindle Edition.
A subsequent footnote makes a powerful point….
1. Writing of the G.I.s’ experience with the German people and of the effect of feeling that they were “just like us,” Glenn Gray points out, “The enemy could not have changed so quickly from a beast to a likable human being. Thus, the conclusion is nearly forced upon the G.I.s that they have been previously blinded by fear and hatred and the propaganda of their own government.” Gray, The Warriors, 152.
Ambrose, Stephen E.. Band of Brothers: E Company, 506th Regiment, 101st Airborne from Normandy to Hitler’s Eagle’s Nest (p. 263). Simon & Schuster. Kindle Edition.
The Germans were not these horrible people they were made out to be in the 1940s, nor are they the monsters portrayed by our “entertainment” industry today. There were some awful Nazis who did awful things but then again our own heroic leaders ordered the firebombing of Dresden and the atomic bombs dropped on Hiroshima and Nagasaki. If the war had gone the other way, perhaps Winston Churchill would have swung from the gallows.
The carnage of World War II is hard to imagine, especially as an American in a nation that was largely untouched by the war, at least compared to Europe and Asia. The core of young European men was gutted by the millions. 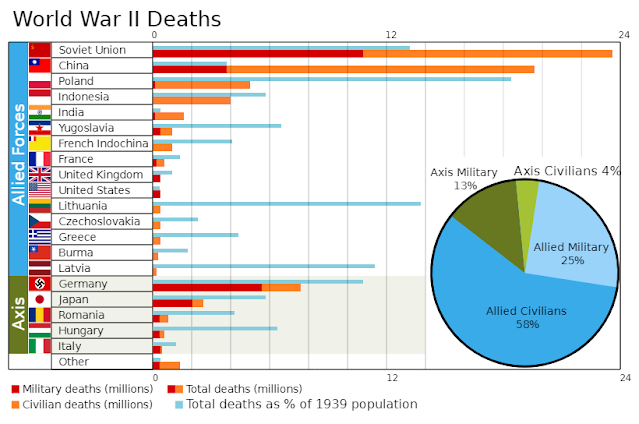 On Memorial Day I asked the question in my post: Memorial Musings

On the other hand, what exactly did we “win” in WW II?
My conclusion? Not much. Maybe a short reprieve, a false sense of victory and safety that is unravelling in front of our very eyes. What would those young G.I.s have thought about what their posterity did with the freedom they bled, killed and died to secure? I think they would have been pretty pissed and refused to go. Jump out of an airplane into flak so my great grandson can be given puberty blockers and have his genitals mutilated so his parents have something to virtue signal about on social media? Charge into the face of German machine guns so my great-granddaughter can whore around and abort her babies in the womb?
Hell no.
Something else interesting to note. In the BoB miniseries, one episode is titled ‘Why We Fight‘, a title taken from the name of a series of propaganda films produced to convince Americans to get involved in a war that wasn’t our business. Naming this episode after propaganda films turns out to be unintentionally very appropriate.
Much of the episode is taken up with the retelling of an actual historical event, the liberation of the Kaufering labor camp in Bavaria. I rewatched it and about 18 minutes of the episode, about a third of the actual non-credits run-time, is taken up with depictions of the labor camp, of starved Jews, of corpses in graves and of the German citizens of the nearby town who were forced to help clean up the camp. It is a portrayed as a significant event for Easy Company and the title implies that liberating these camps is one of the reason for why we fought World War II.
However in the book, the only mention of concentration camps comes in the very end of a chapter titled “Getting To Know The Enemy”, the same chapter I quoted from above to point out the respect the American paratroopers had for the German people. The camp they liberated warranted about a page of mention.

The actual passages on pages 262-263 make up less than 300 total words and certainly come across as a side-note rather than a significant event. The men of Easy Company had seen all sorts of horror in the war and the Kaufering camp was just another one. War is hell and there was horror to be seen from start to finish. Why would something that warrants almost no mention in the book the miniseries was based on be given a prominent role in the miniseries itself?
For several decades the story of World War II has been subtly altered. In the “Why We Fight” series, the war is portrayed as a struggle between the forces of freedom and the forces of slavery. In more recent times, the major battles and the complex geopolitical issues have all been winnowed down to one aspect above all others: The Nazis and the Holocaust. Many people couldn’t even name the other major belligerents in the war or what started it or when it took place but they know about the Nazis being bad because of the Holocaust.
In 1993 the film Schindler’s List was released. It didn’t get much attention at first, only drawing a little over $600,000 on it’s opening weekend but it quickly became one of the most acclaimed films in modern cinema. It won the Oscar for Best Film and Best Director and is the 6th most highly rated film on IMDb. It is a powerful film, no doubt about it. It also marked the point where the story of WW II became “The Holocaust and some people fighting“.
As it just so happens, according to IMDb, the episode “Why We Fight” was directed by one David Frankel…
The discovery of the concentration camps had particular resonance for director David Frankel who lost members of his own family in the Nazi death camps.
So a Jewish director decides to take some “artistic license” and prominently feature an event that warranted only passing mention in the book. The reason is clear, at every opportunity the story of WW II must be retconned to focus on the Holocaust even when it isn’t really relevant to the actual events. Like I said, it is appropriate that the episode takes it name from a series of propaganda films. The reason for this and the implications are for another day.
The men of the Normandy Invasion on D-Day were some of our very best and many of them paid the ultimate price, as did many Germans who fought valiantly on the other side. The world they bequeathed to us is today a cesspool and it appears that we have failed the great test to determine if we could handle a little too much freedom.
I fear that their sacrifice will end up being in vain. 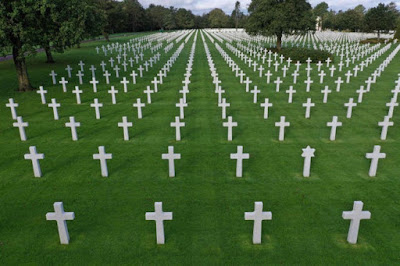