What A Long Strange Trip It Has Been

Journey with me back to the halcyon days of January 2020. Shot Show 2020 was going on, Trump was still President and we weren't talking about the Chinese coronavirus yet. Optimism was running high and the gun world was promising to roll out a whole pile of cool new stuff. As I said in a post, Shut Up And Take My Money!, the clear winner of Shot Show 2020 was Palmetto State Armory. PSA was introducing a bunch of new AK variants, including an AK-74, an MP5 clone that would be a fraction of the price of a real MP5, a personal defense weapon called the JAKL that I was (and am) eager to get and what many were describing as the Glock killer: a 9mm polymer striker fired pistol called the PS9 Dagger, with stainless steel internals including the guide rod, that uses mostly Gen3 Glock compatible parts and magazines but the price point?
$299
A Glock 19 was way more than that, even back in the day. A $300 US made 9mm handgun, quality parts with a lifetime warranty? That got everyone's attention. At the time of SHOT SHOW they were expecting maybe the PS9 Dagger would be hitting the website in the second quarter.
Then the Chinese bioweapon got loose.
Then the riots started.
Suddenly Palmetto State couldn't even keep up with demand on their regular AR-15s and new stuff was put on the backburner. As of today the MP5 clone and the JAKL are nowhere in sight and I really want the JAKL, being a bufferless AR meaning it has a folding "brace" built right in so it is easy to pack up. Chris at Palmetto State rightly called it the ultimate truck gun.
They eventually started to release the AK variants and they sold like crazy and got pretty rave reviews but since I moved away from AKs to concentrate on ARs I haven't had one to shoot. But I definitely wanted the Dagger.
Anyway, spring turned to summer and then summer turned to fall. Most PSA social media posts were full of questions about when this or that was going to be available. Then one day in September, a PSA employee cryptically mentioned something hitting the website the next day at 4 PM, when PSA normally restocks their inventory online.
I had to leave at around 4:15 but I waited on the Dagger product page hitting F5 to refresh at around 3:55 repeatedly. Finally the "add to cart" button appeared! Clicked it and...the website crashed. Started hitting refresh again. After a minute the website was back up and there was a "1" in the cart icon. Went to check out. Website crashed. This happened over and over as I clicked through the steps to check out. Finally hit "submit" and the whole thing went down again and wouldn't come back up. But on my other screen my email refreshed and I saw a confirmation email: 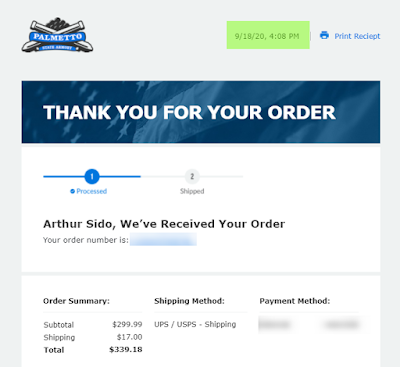 Eight minutes after 4 and my order was confirmed. Lots and lots of other people were not so lucky/persistent. I have no idea how many they released for order but I got one.

It seems like a small deal but I really wanted to get a Dagger.
Little did I know that the journey was just getting started.
We were told to expect a 10-15 day ship time to get the Dagger on the way. That was on September 18th.
September came and went.

October came and went.
Still nothing.
I emailed PSA in November to make sure they didn't need anything else from me. They had my money and my FFL was on file with them.
November came and went.
December came and went.
Still nothing. So I emailed them again at the beginning of January. No ETA on shipment but we did hear through the grapevine that there was a significant problem with one part and that we would all get upgraded to the threaded barrel on our Dagger.
I waited.
About a week later I got another email saying that they still couldn't get the part fixed and I was given an option: Get a full refund or get a "free" stripped AR-15 lower receiver for my trouble and keep waiting. Hell at this point I just wanted to get the gun so I opted for the stripped lower which PSA sells for around a hundred bucks. It came about a month after the email but still no Dagger.
Finally an email arrived a week ago on May 6th...
Hello Valued Palmetto State Armory Customer,
Your order for our PSA Dagger is READY FOR SHIPMENT!  We will begin shipping these orders on Monday, May 10th.
Finally! Sure enough it shipped on Monday, May 10th and arrived via UPS on Wednesday, May 12th. 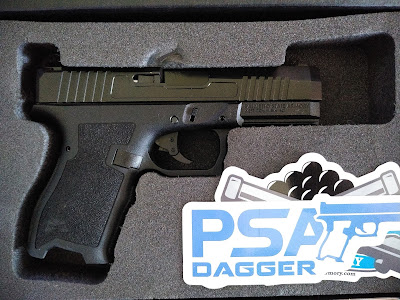 I don't normally post pics of my firearms but I made an exception here. You might notice, keen observer as all of my readers are, that there is not a threaded barrel on this pistol. The day it arrived I got yet another email stating that they didn't have the threaded barrels ready yet so they would send those later. If you are keeping score at home:
- This is a $300 pistol.
- It came with the standard barrel
- They are sending me an additional threaded barrel. A Glock 19 threaded replacement barrel is generally at least a hundred bucks.
- They also sent me a stripped lower receiver, retailing in 2021 for around a hundreds bucks.
So I assume they are losing their ass on every Dagger they sent out in this batch, but they did right by those of us who have waited (not so) patiently. Hopefully they have everything squared away and can start producing these in significant numbers.
I haven't shot it yet but I really like it, it feels more solid than a Glock (I am a Glock hater). The trigger is kind of poor, it reminds me of the old S&W Shield triggers but again you can replace almost anything you want with Glock Gen 3 parts.  It only comes with one Magpul 15 round magazine but those things are inexpensive as hell, you can get 15 and 17 round for like $12 or if you really want to go pimp-style you can get 27 round mags for around $20.
So finally after 8 long months I have my Dagger. There are some lessons for Palmetto State and others to learn about biting off more than you can chew. I think PSA was overreaching at the beginning of last year with everything they wanted to introduce but I respect that they made it right. Keep an eye out and maybe try a Dagger for yourself once they hit regular production.
Posted by Arthur Sido at 8:34 PM