David Chipman, the asshat being put forward as Biden’s choice to head the ATF, itself an agency full of asshats, is being his usual weaselly self during his confirmation hearings. Stephem Gutkowski has a great thread here following the hearings. This was a telling exchange, either Chipman doesn’t know what an “assault weapon” is or more likely he is just being evasive about how they are defined right after he said he would like to see them banned.

This guy is trash but he is dangerous trash.

In a totally unexpected and shocking turn of events, there was a mass shooting today, the same day that David Chipman was testifying before the Senate, with at least eight people dead so far.
San Jose shooting leaves 8 dead, deceased suspect identified; White House monitoring rail yard incident
The alleged shooter, who is dead and apparently set his house on fire, is a 57 year old man named Samuel Cassidy. I would be willing to bet he used an “assault weapon” and based on his name there is a decent chance he is a White guy. The White House wasted no time in putting out a statement:
In Washington, D.C., principal deputy press secretary Karine Jean-Pierre said the White House will continue to stay in close contact with local officials in San Jose, before using the shooting as an opportunity to call for Congress to strengthen background checks.
“The White House is monitoring the situation, and our hearts go out to the victims and their families,” Jean-Pierre said. “We still don’t have all the details, but what is clear, as the president has said, is that we’re are suffering from an epidemic of gun violence in this country, both in mass shootings and in the lives that are being taken in daily gun violence that doesn’t make national headlines.”
Not mentioned is that this happened in California, a state that already has some of the most restrictive gun laws in the country, a fact that did nothing to stop these eight people from being killed. That is truly some curious timing.
I was pleasantly surprised to get an email from one of my Senators, Mike Braun, expressing his opposition to Chipman. Here is the text of his letter… 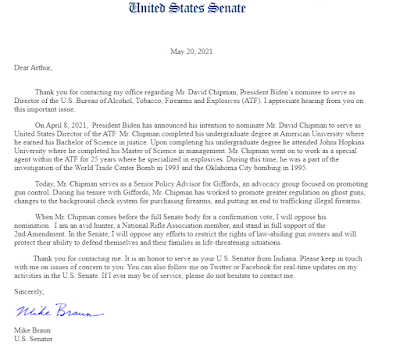 Braun must be getting nervous about re-election.
Chipman will likely be confirmed, placing an outspoken advocate for infringing on the Second Amendment at the head of the ATF. This little reprieve in gun and ammo availability will be short-lived, don’t waste this opportunity.