The United States Of Murder

From Steve Sailer:
We'll be Lucky if Murders Are Only "Spiking"
Sounds like some mainstream liberals are worried that the media can't keep a lid on America turning into Murderopolis while the Feds chase "White supremacists". Sailer quotes Ezra Klein (yes he is) worrying about "spiking" murders.

Klein seems mostly worried in his thread about the rise of "law and order" conservatives more than the carnage in the black and mestizo community. Then again Klein doesn't live in those neighborhoods. Sailer further quotes:
Yet, the most extraordinary fact of 2020 is that for the seven-plus months from George Floyd’s death to the end of the year, the United States averaged 50.5 murders per day, up 41% from the 35.7 per day during the same long period in 2019. The consistency of the gap between 2020 and 2019 during the Racial Reckoning is striking.
It is really, really bad. I read this morning that Columbus, Ohio just saw it's 77th murder of the year when a 16 year old girl was killed along with five others under 20 who were wounded. What the hell happened to Columbus? It used to be a nice city, sure there was a lot of property crime around campus, bikes and cars stolen, that sort of thing, but 77 murders before Memorial Day? Here is a little clue:

I attended Ohio State from 1990-1991 before transferring. When I was there the city was around 74% White. Now it is under 60% White and dropping fast in just 20 years, probably faster as crime gets worse and Whites flee to the suburbs.
Elsewhere in the Buckeye state, two adult men were murdered by "juveniles" in Maple Heights. One of the men murdered spoke at a black Lives Matter rally for George Floyd but based on this picture of yoofs accused in his murder, he was worried about the wrong black lives. 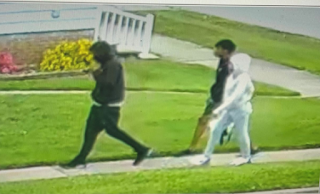 Fight the power and all that.
Meanwhile there was a mass shooting in Youngstown, Ohio with three dead and eight injured after an "altercation" led to gunfire. Based on the video from the news, I think we can make some assumptions about the shooter(s). That is just Ohio and just the last few days.
Conservatism is plummeting into electoral irrelevance but if there is a glimmer of short-term hope, it will be if the GOP goes all in on getting tough on crime. Every Republican candidate from President down to dogcatcher should be talking about violent crime and locking people up. It won't save them long term, demographics will guarantee that, but it might be enough to win a couple of election over the next few years.
Posted by Arthur Sido at 3:10 PM