Oh boy.
Biden Admin Grants ‘Temporary’ Amnesty to Over 100,000 Haitians Who Are Illegally in the US
DHS Secretary Alejandro Mayorkas announced on Saturday that the extended protected status will be applied to Haitians who have been in the US since at least May 21, due to “social unrest, an increase in human rights abuses, crippling poverty, and lack of basic resources, which are exacerbated by the COVID-19 pandemic” in their own nation.
Haiti is always in the middle of social unrest and crippling poverty so you can assume that their "temporary amnesty" will become permanent, not to mention the innumerable new "Americans" they will continue to create via copulation and delivery on U.S. soil.
Haiti is a basket-case and always will be for one primary reason: it is full of Haitians. As I have mentioned before, I went to Haiti on a mission trip and it is a hopeless cause. The problem isn't that they need Jesus or more money or more White missionaries giving them handouts. The problem starts and stops with demographics. Haiti as a nation could be prosperous with different inhabitants. Haitians as a people would be a ghastly failure anywhere they lived. That sounds harsh but pretending it is otherwise isn't doing anyone any favors. Haiti could maybe be OK with a different ruling people who could keep things under control but with independence has come chaos.
The Haitians got rid of the European population via the sword two hundred years ago and have been adrift ever since. While most African nations gained independence in the 20th century after decades of European influence and infrastructure, Haiti became independent at the beginning of the 19th century. The difference is stark.
What is the utility of 100,000 Haitians becoming de facto permanent residents of the U.S.? The conditions in Haiti will never improve so they will just linger here in a legal limbo until a "path to citizenship" is passed and we get another 100k voters who fled from their own country because they couldn't handle freedom.
What could possibly go wrong? 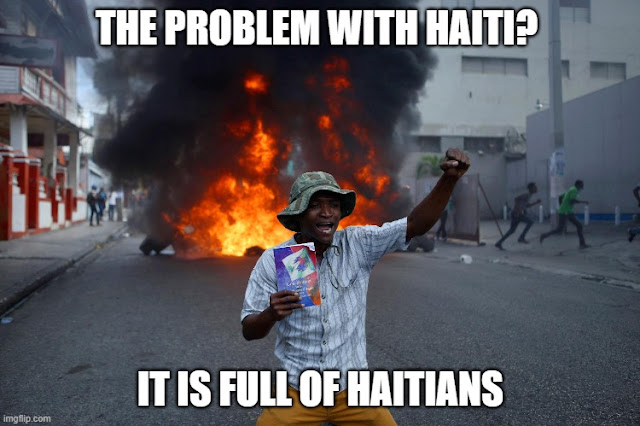