While checking on the tally for the weekend, I stopped over at the Chicago Sun-Times. Still a long way to go to match last year with 94 shot, 30 fatally and it wasn't even a long weekend. Anyway they ran a piece titled: Praying, marching and cooking out: Violence prevention workers fan out for Memorial Day as shootings continue to rise in Chicago. When you live in Chi-town, you brace for the mass violence while normal people are planning vacations and grilling burgers. The article is full of quotes from "faith leaders" trying to explain why they need more money for their "ministry" while studiously ignoring the main problem. Like this fella, a "Jahmal" Cole:
“Gun violence is a reflection... of a lot of things — racial and economic injustice, high incarceration rates, high unemployment rates, poor neighborhoods and under-resourced schools,” said Jahmal Cole, founder of My Block, My Hood, My City. “If you have those five things, that’s the perfect conditions for gun violence.”
For the second year in a row, the nonprofit is funding dozens of events over the long weekend on the South and West sides, investing nearly $50,000 in community groups.
I have to wonder how much money "Jahmal's" group raised versus the $50k they are throwing to friends and family of "Jahmal" totally deserving recipients? His group My Block, My Hood, My City (also known as "Role Model Movement Inc, NFP dba My Block My Hood My City") has at least 16 employees from what I can see, most with college degrees so you know they are pulling in some scratch including this guy, one DeNairio Bolton listed as Executive/Personal Assistant to CEO and he definitely is not gay.... 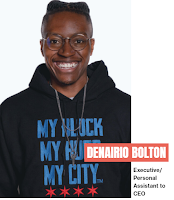 Yep, I am sure he is totally straight. Plus he has a "BS in Physical Education specializing in Exercise Science" and an MS in Nonprofit Administration and is working on a PhD in "Organizational Leadership" from the Chicago School of Professional Psychology. What the eff is "exercise science"? That seems like a lot of education to be a executive/personal assisatant to Jahmal and I am sure that isn't a euphemism for something homo. Um anyway....
A better question, does anyone really believe that the five factors he lists ("injustice", mass incarceration, unemployment, poor neighborhoods, poor schools) is what causes all of the shootings? There are tons of poor Whites in bad home situations with high unemployment but you just don't see this level of gun violence.
One of the unremarked and infuriating results of the endless violence in urban areas is the rise of the parasite class of clergy and "activists" that latch onto the violence for their hustle. They stand around and look solemn and maybe pray a little, perhaps sporting a bowtie to add gravitas to their grift. They claim that the problem with gun violence in the black community can be solved with a steady stream of donations to their "non-profit" organization that mostly seem to pay for expensive suits, watches and cars for the heads of these non-profit groups.
Community organizers, social justice activists and most black clergy seem to have cynically, although perhaps understandably, given up on things ever getting better in their communities and instead have settled for hustling gullible White people and corporations in a bid to avoid gainful employment. They profit from the misery of their own people and that makes them scumbags in my book.
This weekend will see a massive casualty count and a few handouts from Jahmal and his "team" won't make a damn bit of difference but he will probably raise lots of money and avoid getting a real job while his fellow blacks lay bleeding in the streets.
Posted by Arthur Sido at 7:01 PM