Our Summer Of Discontent

There is a common theme running through the writings of many of the people I follow online, one I have been dealing with as well, and that theme is that many people expect things to get crazy this summer. The reasons for this are pretty consistent and it mostly has to do with multiple problems coming to a head at one time, tipping the balance inexorably into craziness.

1. Warmer Weather
It is without debate that warmer weather brings out more violent crime. People who originally come from a tropical climate are less likely to be out and about when it is cold but when the weather gets hot and humid, large groups start to gather. When you get large groups, especially of Africans, in public, it is likely things will get hairy. Most violent crime by a significant margin is committed by people of African or mestizo heritage and both groups come from warmer climates. Following last year and the recent Chauvin verdict, it is only natural that cops will retire or move out of cities and that those who stay will drive very slowly to 911 calls. Who wants to show up on scene and get into a situation where trying to interrupt a criminal committing a crime might very well end up with you being arrested and jailed? Hot weather plus reduced police equals massive bloodshed.
2. Inflationary Pressure 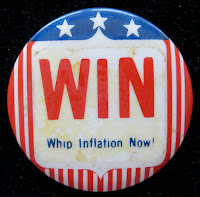 I have written about this a lot and the sheer volume of conversations about inflation haven’t been seen since the Ford and Carter years. By any measure prices are skyrocketing on all sorts of stuff. Gas locally in many stations just climbed again and now sits precariously at $2.99 a gallon, apparently just waiting for someone to be the first to post a price starting with 3. Prices have been steadily rising and at some point they are going to start to hit a point where people feel it. Right now it is mostly hitting the production side but those price increases are filtering down and consumers will feel the pinch soon.

3. Food And Other Essential Goods Shortage
Along with higher prices we are likely to see shortages that are indirectly a result of inflation. Here is a great example of this. The beef you eat almost certainly comes from cattle who are fed a steady diet of corn to fatten them as quickly and efficiently as possible. The formula for raising calves into fat cattle ready for slaughter is simple: Time + Corn + Liberal Doses of Antibiotics. The total of inputs should be less than what you sell them for as a reward for your time and labor.
Corn prices, as with many other commodities, are skyrocketing. Right now as I check May corn is at $7.57 per bushel. That may not mean anything to you but it represents a huge spike in the cost of one of the largest inputs required to raise beef. On the other side of the equation, prices for fat cattle are in the toilet. So you have expensive corn needed to raise cattle that are selling for low prices meaning that the profit margin for many cattle producers is not being squeezed, it is gone to the point of making raising cattle unprofitable. Many of the Amish we know raise cattle from bottle babies to near finished and they need a lot of corn to get them to 600 or 700 pounds and many of them are not refilling their barns with day old calves because they can’t make money with corn prices that high. That will jack up the markets on the supply side, which in turn will lead to higher retail beef prices. You see where this is going.
4. The Job Market Is Awful
Not awful in the sense of being hard to find a job, awful if you are trying to hire someone. A major jobs report was released this morning that was supposed to show at least a million new jobs in April with some crackheads calling for over 2 millions jobs. The result:
“Literally Shocking Data” – April Payrolls Miss Huge, Just 266K Jobs Added Below Expectations Of 1 Million
Oops. The prior two months saw net adjustments of 78,000 fewer jobs than first reported. This was common under Obama, it seemed like every monthly jobs report was trumpeted by the media but then was quietly adjusted downward later. The same story also reports that people just don’t seem that interested in working:
The disappointing April payrolls leaves overall employment 8.2 million jobs short of its pre-pandemic level and is consistent with recent comments from company officials highlighting challenges in filling open positions. While job gains accelerated in leisure and hospitality, employment at temporary-help agencies and transportation and warehousing declined sharply.
Well duh, with a firehose of free money why would you want to work at all? This will get worse when the checks start showing up in July, just two months from now. With it harder and harder to find domestic employees, more production will be shifted overseas and that will stretch the supply chain more.
5. Simmering Civil Unrest 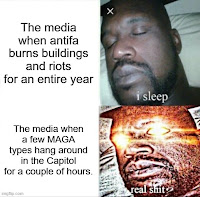 We are just one police shooting of an African, justified or not, away from a new blow-up. It is just a matter of time. Then we have antifa still conducting a year long armed insurrection in Portland that the media is studiously ignoring. Federal buildings burned, police assaulted, declarations of political autonomy and crickets from the media who hasn’t shut up about January 6th for months.

On the other side of the political equation, at some point between the planned false flag mass shooting and pressure from gun control groups it is certain that Biden and/or Congress will pass some serious infringement on gun rights. As I have gone on record to say, there is a different attitude in the 2A community. 15 years ago a new gun ban would have likely not caused as much outrage but now people are mentally getting prepared to defy a ban and start going kinetic if they try to confiscate our guns.
By itself, any one of these wouldn’t be that big of a deal but they all seem to be coming to a head at the same time and most people expect it to be sometime this summer. Maybe we are wrong but the summer of 2021 has the promise of being the most explosive since the Vietnam/Civil Rights era but with the unrest being far more widespread.
It is only early May but there is an ominous atmosphere in the U.S.
Tick tock.