The second Star Trek movie, The Wrath Of Khan, was by far the best Star Trek film and should have been the last. It was a natural progression from the original series with the main characters having aged and been promoted. Kirk was an admiral, Spock was a captain. Even the protagonist, Khan Noonien Singh, was linked to the original series. TWoK did something pretty spectacular in killing off a beloved character, Captain Spock, in one of the most gut-wrenching scenes in cinema. I was 11 when I saw TWoK in the theater, having grown up watching the original series on TV and reading all of the available books and it was like a punch in the stomach.
Anyway, the movie starts out with a young Vulcan cadet facing the dreaded Kobayashi Maru scenario, a command exercise designed to test how Star Fleet cadets would deal with a non-win scenario. It is billed as something every commander might face. We find out later that Kirk, when a cadet at Starfleet Academy, had taken the test three times and finally beat the scenario. His solution was "unique"
Saavik: Admiral, may I ask you a question?
Kirk: What's on your mind, Lieutenant?
Saavik: The Kobayashi Maru, sir.
Kirk: Are you asking me if we're playing out that scenario now?
Saavik: On the test, sir... will you tell me what you did? I would really like to know.
McCoy: Lieutenant, you are looking at the only Starfleet cadet who ever beat the no-win scenario.
Saavik: How?
Kirk: I reprogrammed the simulation so it was possible to rescue the ship.
Saavik: What?
David Marcus: He cheated.
Kirk: I changed the conditions of the test; got a commendation for original thinking. I don't like to lose.
Saavik: Then you never faced that situation... faced death.
Kirk: I don't believe in the no-win scenario.
That was perfect Kirk, the arrogant commander who never had to face death. Of course later he does and that makes this exchange so excellent. 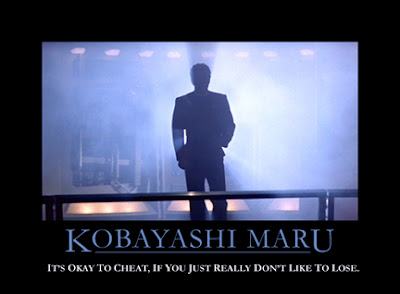 That brings me to this country of ours, in the midst of a Captain Kirk solution to our own Kobayashi Maru. What got me thinking about Wrath of Khan and the U.S. was a post from John Wilder that you should read this Memorial Day weekend: The Way The Constitution Dies
Like John, when I was growing up we thought highly of the Founding Fathers and the Constitution was held with an almost creepy reverence as our founding document. We were taught it had near magical powers to restrain evil-doers and protect us from Communism. It was an article of faith that it was the best system of government ever put on paper and that because this was so self-evident, it would never fail  us. We could worship (or not) as we saw fit, our press would be free, those damn British soldiers wouldn't be quartered in our homes, on and on. It is not a stretch to say many Americans in those days, and still among older Americans, viewed the Constitution as a sacred document on par with the Bible.
The Constitution was designed to restrain the worst and unfortunately most common impulses of men. It was intentionally formed in a way to create boundaries around the government and to make it both difficult for the majority to oppress the minority as well as nigh impossible to change. The standard for amending the Constitution is extraordinarily high for a reason. It is not supposed to be changed on a whim and requiring the states to ratify any amendments prevents the bigger states from steamrolling  the smaller. By requiring 2/3 of both chambers of Congress and then 3/4 of the states to ratify any amendment means that when it comes to ratifying the Constitution, a state like California or Texas is no more powerful than Wyoming or Rhode Island. This is the design.
It also means that for the Left, the Constitutional form of government is their Kobayashi Maru, the no-win scenario.
How this works in a practical sense is that it is hard to change the way the government works. It drives the Left crazy that no matter how many mestizos they pack into California, California only gets two Senators and only gets a certain apportionment of votes in the electoral college. The fact that the diverse utopia of California gets two Senators and a racist White supremacist state like Wyoming also gets two Senators offends their belief in the tyranny of the majority (at least when they have the majority).
At this juncture in 2021, after having successfully stolen the last two major election.  the presidential in 2020 and the subsequent Georgia run-offs, and with their demographic displacement strategy seemingly on the cusp of complete victory, one would think they would be pretty happy. They aren't. They are not happy because the rules are still in place and they constrain them from running roughshod. So in the spirit of young Cadet Kirk at Starfleet Academy, they are simply changing the rules.
That dastardly Supreme Court still upholding stuff like the right to keep and bear arms and freedom of speech, and maybe even threatening to strike down the Most Unholy Sacrament Of Abortion? Just add a bunch of justices to swamp the old appointees!
Freedom of expression getting you down and making you sad? Simple, declare "racism" to be a "public health crisis" and then you can stamp out free speech in the name of "public health"!
Pesky groups promoting traditional morality like the Boy Scouts and churches? Infiltrate their ranks with homosexuals and partisans pushing critical race theory to gut them from the inside out!
People exchanging ideas about politics and even advocating for unapproved politicians, but you can't do anything about it because of that damn First Amendment? Just subcontract censorship to social media companies!
A 50/50 split in the Senate? Why not add a couple of "states" that will reliably elect two leftist Senators each!
For the last hundred or so years the Left has been waging a war against the Constitution, desiring to remake America and the West in their own image. From the New Deal to the Great Society and now the Great Reset, they have waged war against stubborn notions like individual freedom and responsibility and limited government. They have won far more than they have lost, Reagan and Trump notwithstanding, but still they find themselves thwarted too often for their liking by the Constitution. That final barrier that has stood the test for hundreds of years is about to be lost.
What comes next will be very different. The U.S. is entering a post-political period where the political process will no longer work, not even as poorly as we have come to expect. More and more people are saying what people like me have been saying for months, that we have seen the last pretense of a free and fair election in America and that the ballot box is useless. The rallying cry is more often that we aren't voting our way out of this. There are still many holdouts who refuse to believe that it is over but it is. They have changed the rules and now all bets are off.
It had a good run but the end is here. We can learn from what the Founders failed to account for, and how could they have imagined all that has happened since the 18th century? We can vow to do even better the next time around. All of that is true but first we must again pass through the fire and hope we come out on the other side. Many of us won't but to quote Admiral Kirk
...How we deal with death is at least as important as how we deal with life
Posted by Arthur Sido at 10:33 AM