The Miami po-leece have a brief video showing the villains who shot up the El Mula rap concert in Miami. Looks like it might be the same guys who attacked Jussie Smollett.... 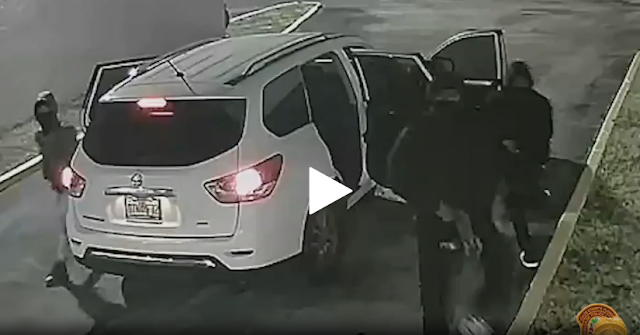 If you ever wondered why there are so many random wounded people and so few killed in these black on black shootings, according to the time stamp these fellas got out of the car at 10:05:30 and ten seconds later were back in the car so they were just randomly spraying into the crowd.
Obviously a significant black on black mass shooting is counter-narrative so the news roundup I get about the phrase "mass shooting" had more stories this morning about this clown in Texas thinking about committing a mass shooting than the two mass shootings in Miami over the weekend that actually happened. (BCE note the three names again: Coleman Thomas Blevins!) 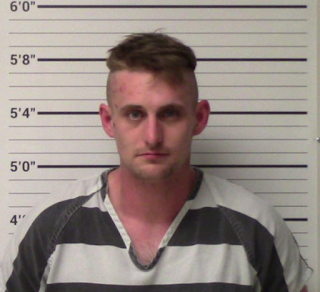 Kerrville man arrested after officials intercept plans for mass shooting at Walmart
Wow that is some good police work! Or was it. Check out the photo: 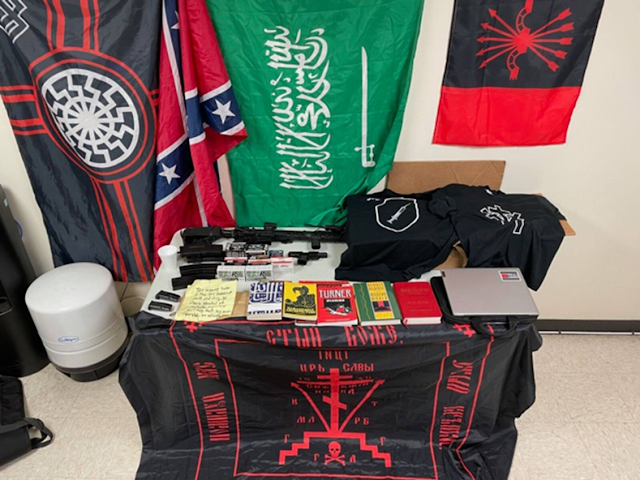 As usual, the various flags all are wrinkled and still have the fold marks from where they were taken out of the package, probably by the cops/Feds minutes before the picture was taken. I recognize the Confederate stars and bars of course and the Sonnenrad/Schwarze Sonne on the flag on the left, plus completely at random the green flag of Saudi Arabia in the middle. The banner in front I have no idea about nor the red and black flag on the right. Maybe somebody can help me out? I guess the cops didn't know which flags to use so they used them all. (update, someone else on Twitter identified the small flag as being the Falange flag, a Spanish fascist group and the one in front as some sort of Russian Orthodox church flag?). Anyway, check out this totally believable, not at all bullshit, story:
Coleman Thomas Blevins, 28, popped up on the KCSO radar last week, so the office reached out to Blevins. According to the KCSO, it confirmed Blevins was planning a mass shooting after speaking with him.
In a message KCSO intercepted, Blevins allegedly threatened to shoot up a Walmart, which location was not released.
Blevins was arrested Friday on a Terroristic Threat warrant, then officials got to work on a search warrant at his home.
There, deputies say they found firearms, ammo, electronic evidence, concentrated THC and “radical ideology paraphernalia,” which they said included books, flags and handwritten documents.
We are told Blevins is on active felony probation, which means he is prohibited from having guns. He remains in jail.
Alrighty, so three name guy is on felony probation but somehow the cops got him to "confirm" he was planning a mass shooting at a Wal-Mart. The guy has more flags than guns, what kind of Texan only has two firearms? I also liked the "radical ideology paraphernalia" which I am pretty sure possessing isn't against the law. I recognized 'The Turner Diaries' on the table and Julius Evola's 'Revolt Against The Modern World'. I don't recognize the other books but I did especially like the legal pad hand written note in giant letters which probably says "I am going to shoot up a Wal-Mart" or something, in a cops handwriting.
This screams set-up. Maybe he had the guns in the house but the flags and books look like something from the Fed entrapment starter kit. I am sure this just happened to hit the news right after a black on black mass shooting. Totally unconnected.
Come on.
Update: Early Tuesday morning and checking the local news where I see this story not once but twice. Why is WANE 15, a local news station in Fort Wayne, Indiana, carrying the story about a guy in Texas thinking about committing a crime? Figure that out and you are well on your way to understanding the media in 2021. 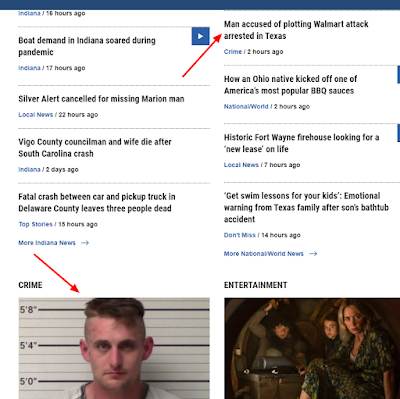