This is a topic that hits close to home, as the son of a physician and for other reasons I will explain one day.
Getting into medical school was historically one of the most difficult academic achievements in our educational system. Anyone can get accepted to a college and most people of modest intelligence can get into post-grad programs, especially in low rigor fields like education and the liberal arts. But medical school demanded a very high GPA, outstanding MCAT scores and lots of extra-curricular activities. No surprise, this has resulted in a skewed racial distribution among medical school students (click to enlarge): 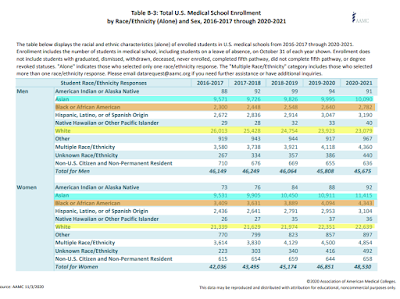 Out of 94,205 enrolled in medical school, 45,718 med students are White or just shy of half. As White people are about 60% of the population, and about 100% of the people who founded medical schools and colleges in America, that means we are slightly underrepresented in medical school. On the other hand, no shock here, there are 21,505 Asians enrolled as of this chart or about 23%. However Asians of all kinds are only 6% of the U.S. population and are therefore drastically overrepresented. On the other side of the equation, there are only 7,125 blacks enrolled in medical school (61% female) which is about 7.5% while blacks as a whole are a around 13.5% of the U.S. population. Mestizos make up around 6.6% of the med school population yet they are 18% of the population. Some of that is likely due to many mestizos being first or second generation and still struggling to assimilate, much less go to a professional school.
Bottom line, Whites and Asians make up most of the professional medical professions like physicians, as well as veterinarians and pharmacists. Mestizos and blacks are significantly smaller percentages, well under their overall racial percentage. In general, most people are quietly OK with this because a doctor isn't like a barista with a sociology degree in that their competence matters. Like in a life or death kinda way.
Of course this being 2021, we can't have disparity no matter what. Here comes the American Medical Association with their 1000 employees. The AMA is supposed to be the main trade group representing doctors but that hasn't been the case for decades, even back when I was young and my dad was still a practicing physician. Today? The AMA is completely off the rails. Behold the madness....
If Youtube nukes this video, here is the original at Bitchute. You can also read the transcript and see the charts Jared mentions here: The American Medical Association Goes Insane
This isn't really new. Like most college programs, medical schools have been giving preferential treatment to non-White/Asian students for a long time in order to have enough non-Whites in their promotional photos. It is not a stretch to say that the standards for admission for blacks and mestizos are completely separate from those for Whites and Asians. This is the data from The AAMC, the organization that pretty much runs the medical school admission process, from the MCAT test to the admissions process. Prospective students apply through the AAMC portal to the schools they want to attend and then later use a different system to apply for residency.

As you can see,  there is a significant difference in the academic achievements of medical school students related to their race.
I highlighted the science GPA for a reason. It is easy to pack your schedule with easy social science courses to boost your GPA but your science GPA tends to be more revealing of your academic abilities. Chemistry and biology are, or at least used to be, based in measurable factors. The composition of water is H20, regardless of how it makes you feel. The average black student had a mean science GPA of 3.17, a mediocre average barely above a B. Asians on the other hand had an average of 3.53 and Whites 3.57. That would suggest a lot of blacks in medical school had below a 3.0 average in their undergrad science classes, before heading off to medical school where the academic rigors are much higher. More on that in a second.
It doesn't seem like a huge difference in MCAT scores but you have to keep in mind that the range is more narrow than this would indicate. In the most recent MCAT testing, the scores ranged from 472 to 528 so each point was around 1% difference. With a mean MCAT of 498.3, that puts blacks well in the bottom half of MCAT scores. As an interesting side note, mestizos had a higher mean MCAT score of 501.1, still lagging Whites and Asians but mestizos are less represented in medical school compared to blacks while being a larger percentage of the population. 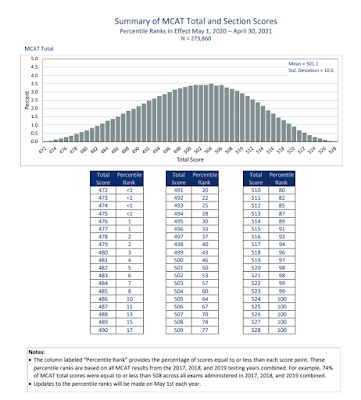 By both major academic metrics used for medical school admission, GPA (esp. science) and MCAT scores, blacks trail other races by significant margins.
I am sure there is already a quiet push to get rid of the MCAT, just as many schools are no longer using SAT scores, because as long as there is an objective test measuring academic preparation, blacks will lag far behind the other races in admissions.
What about on the other end, graduation rates? We already pointed out that blacks make up about 7.5% of the accepted students in medical programs. How does that translate on graduation? There is an answer to that as well: 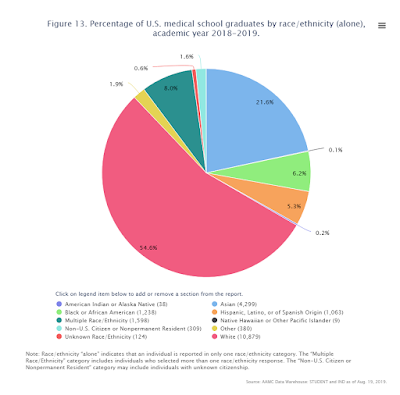 You will need to click the picture to see the details but here are the key takeaways:
- While blacks are 7.5% of admissions, they are only 6.2% of graduates. I would take that to mean that over 18% of blacks don't graduate. This is in line with college in general where blacks have very poor graduation results.
- Mestizos are 6.6% of those entering medical school but only 5.3% of graduates, also showing a significant failure to graduate.
- On the other hand, Whites are slightly less than half of new medical school students (48.5%), but they are 54.6% of the graduates indicating that Whites do very well in the high pressure, high achievement world of medical school compared to other races.
- Asians are a slightly smaller percentage of grads, 21.6%, compared to admissions, just shy of 23%.
In other words, Whites thrive in medical school as a whole suggesting that there are likely many White students who don't make it to medical school because a preferred minority got their slot but that they would have likely done at least as well as the minority.
What this means is that we are no longer getting the best doctors we can from medical school because the admissions process is skewed toward racial preferences and rapidly away from pure academic excellence. While there is more to being a doctor than being smart, a doctor must possess a certain level of intelligence and ability to understand complex issues simply as a baseline. Being smart isn't a sufficient feature to be a good doctor but it is a necessary one.
Something else rarely noted about this is the impact it has on black and mestizo doctors who did earn their way into and through medical school. Understandably it will be assumed that they too were accepted into medical school on the basis of their race rather than their credentials. There are black applicants with very high MCAT scores and outstanding GPAs from challenging schools who would be accepted even with a "color blind" admissions process but their M.D. will be tainted with the assumption that they only got in because of racial quotas. We can see that a lot of blacks do excel in medical school and the vast majority do graduate but the stigma of being considered a diversity selection will always be there and if I was a black doctor I would resent the hell out of that.
If your Stabucks barista with a grad degree in Prehistoric Latin American Sex Toys screws up, you get the wrong coffee. If your surgeon screws up, you could die. We are past the point where we can just brush off racial preferences in academia as being mostly unimportant. Now we are seeing a push for "equity" in medicine, science and engineering. This absolutely will lead to disaster and the people pushing this know it, but simply don't care.
Find yourself a reliable White or Asian doctor in his late 40s or older and get care established. They might still be screw-ups (what do you call the guy with the worst grades in his medical school graduating class? Doctor.) but the odds are better than you will get with a doctor who only got into med school so their school could bolster their "underrepresented student" percentage.
Posted by Arthur Sido at 1:21 PM