The temps are heating up and so are the mass shootings!
First a little local flavor.
Mass shooting leaves one person dead, 4 injured at Fort Wayne apartment complex
The shooting occurred in one of the typical diverse neighborhoods where most shootings in Fort Wayne take place. Shockingly a suspect has been arrested, one Jamarion Thomas. I will guess Jamarion is a black fella. Then to New York state....
6 shot in Albany shooting, multiple with serious injuries
Another suspect arrested, the cops are having a great weekend:
Albany police have arrested Jhajuan Sabb, 21, of Schenectady
Jhajuan Sabb? Another Swedish guy apparently.
Then to Northern Mogadishu, aka Minneapolis...
2 dead, 8 injured in downtown Minneapolis shooting
Minneapolis has very quickly devolved from a nice Lutheran city into a violent urban hellhole. According to the report:
The shooting involved a dispute between two people who both pulled out guns and started shooting at each other, according to Minneapolis Police Department PIO John Alder.
A dispute leading to two groups blazing away at each other. Gee that doesn't sound like pretty much every other urban mass shooting ever or anything.
As a non-mass shooting bonus:
Portland police seeking 5 teen suspects behind brazen broad daylight attacks
The subheading:
Suspects targeted Jade District, a program run by the Asian Pacific American Network of Oregon
Clearly more White supremacist violence toward Asians! 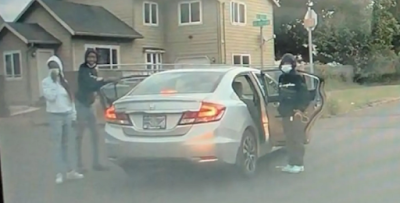 Investigators described the suspects as being as many as four Black males and one Black female, all of whom are believed to be teenagers.
Oops, never mind!
There'll Be a Hot Time in the Old Town Tonight....and the rest of the summer.
Posted by Arthur Sido at 2:30 PM