We have created a whole lexicon of coping language to try to hide what is going on around us, to try to make the madness make some sense. The media uses terms like "juveniles" and "youths" to disguise older black teens although we all know what they are talking about. "Systemic racism" is applied whenever there is an uncomfortable pattern of behavior. We invoke "America's original sin" to explain why people who never were slaves are nevertheless apparently incapable of functioning in a normal society, even though every other racial minority is adapting far better.
One of the favorite euphemisms is "gang related", often used whenever there is some sort of black criminal behavior, even when it doesn't really apply. Here is a local example.
In 2015 a White woman named Amanda Blackburn was murdered during a robbery in her home in Indianapolis shortly after her pastor husband left. She was 12 weeks pregnant with their second child at the time. 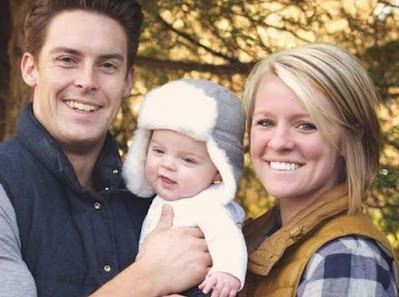 Her murder was part of a string of crimes committed by two of these men, including murdering a man named Rolando Gonzalez-Hernandez, apparently because he only had $10 when they robbed him, as well as another burglary where a woman was robbed and sexually assaulted by Taylor (the guy on the left). Taylor is yet another 18 year old black man who had led a life of crime that finally resulted in murder and who will now spend the rest of his miserable life in prison. It was back in the news because one of the men was just sentenced in her murder nearly six years later.
We can't just chalk this up to black violence, there must be something else so the Indy Star ran this headline:
Amanda Blackburn case: Murder suspects have gang ties
Wow, this was a gang related killing?
Well no because while two of the men had been in some sort of gang many years earlier (and not even the man who pulled the trigger, Larry Taylor) the article goes on to say:
Could the robbery spree that culminated in Blackburn's murder also be a gang crime, perhaps even an initiation?
When asked Monday, Indianapolis Metropolitan Police Department spokesman Sgt. Kendale Adams emphatically said no.
"Gangs are fluid," Adams said. "There was no known gang activity connected to this particular crime."
So what is the point of mentioning the "gang ties"? Why would this be a "news" story?
"Gang" is a term the media uses to remove culpability. It wasn't their fault you see, they were caught in "gang activity". It is an amorphous term that obfuscates that these cases, like the murder of Amanda Blackburn, were just examples of the generic black violent crime that are part and parcel of a diverse society. These fellas decided to rob some people because that is easier than showing up to a job but one of them, Larry Taylor, decided that robbery wasn't good enough so he raped a woman they were robbing and then murdered a different woman. It wasn't a "gang" activity but the media still tries to put that idea in the mind of the reader so the media can avoid talking about the real issue.
This is not new. Last year I ran a piece titled: How Do We Reduce Black Crime Statistics? Stop Counting Black Crimes! If you interact with most White liberals and/or blacks on social media, you will find they are convinced that most mass shooters are White and they often will refer to the Newsweek story I linked to in that post. Here is the screenshot of the piece: 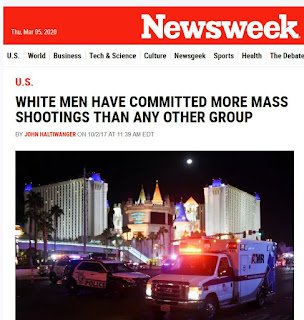 If you read my posts with any regularity or if you just pay attention to the news you will know that isn't true and isn't even close to being true. It is so untrue as to be bordering on criminal. So how can they make that claim? The claim is based on a study in Mother Jones magazine that no one bothers to read but if they did they would find out how this claim is made, namely that the Mother Jones study only counted shootings were four or more people were killed but more importantly they excluded "conventionally motived crimes such as armed robbery or gang violence". They also excluded shootings where the shooter was not identified which is a significant portion of  mass shootings. The victims know who was shooting but they aren't telling the cops, a common behavior in black communities where distrust of the police is high and the preferred way of dealing with a shooter is to conduct your own mass shooting later. In this way anyone who at any time had any sort of affiliation with a gang no longer counts as a mass shooter, no matter how many people they shoot.
Read the whole thing but the gist of my post was that the easiest way to prevent people from learning about black crime is to stop counting black crimes. That is the same motivation that causes media outlets to stop publishing mug shots because the mug shots are uncomfortably slanted toward black men glowering at the camera.
Everyone knows that when the media talks about "gangs", they are just talking about black criminals. It is just another way to avoid have an honest discussion about the intersection of race and violence that makes our inner cities unlivable.
Posted by Arthur Sido at 10:11 AM