Our benevolent overlords in Coruscant finally released my tax "refund" and it hit my bank account this morning. How efficient of them! Of course I filed that return and it was accepted a minute ago...

If you will notice the highlighted date from the email in the corner. Accepted on February 13th, 2021. Now I expected there to be some delay as the IRS has been verifying and double-checking returns with the earned income tax credit to make sure you actually have the kids you say. I am fine with that. It normally delays the return a few weeks at a minimum, so like late February to early March. They even warn you about it. 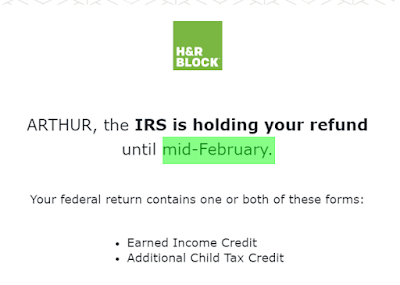 This ain't mid-February. It ain't even early March. This is early May.
My incredibly math skills say that it has been 81 days since my return was accepted. That is about 20% of a year.
Our tax return is not that complex. A single W-2. Two Schedule Cs and related self-employment filings. We always use the standard deduction. The business income and expenses are pretty straightforward. Yes we have kids on our return but we have been filing a joint return for almost 30 years. You can see us adding kids one after another until we got to 8 kids and then watch them slowly dropping off as the older ones turned 18 and started to file on their own. It isn't hard to figure out but for the last few weeks we and millions of tax-filers have been getting this message when we check the status of our refund:

A few weeks ago this was the headline at Fox Business:
IRS holding over 29M unprocessed tax returns, delaying refunds for many low-income Americans
29 million unprocessed returns as of April 23rd. 29 million. The IRS has basically two jobs, collecting income taxes and processing the tax returns of citizens. They apparently can't even do the second one properly. But now they need another $400 million bucks and up to 500 new employees to process the monthly pre-paid child tax credit. I am sure that will go smoothly.
I really wish the average American possessed the brain cells to recognize that the Federal government is the worst, and getting much more worserer every day, institution in America and giving it more and more control over our lives is foolish and dangerous. Unfortunately most Americans don't get this at all.
The only silver lining is that these are the same imbeciles who think they are going to confiscate 400 million firearms from tens of millions of pissed off Americans. Good luck with that.
Posted by Arthur Sido at 7:20 AM