All Politics Are Identity Politics

Human beings as we know them have been around for a while, tens or hundreds of thousands of years. We are found all over most of the world and we come in pretty distinct races. Within those races there are ethnic subgroups. In most cases there are also other significant divisions based on things like religion.
It has also been the case that for almost all of the existence of humanity, there has been constant and bloody conflict over resources. Human life has usually been marked by scarcity of things like land, fresh water, shelter and food. Even now we deal with scarcity. How many wars have been fought in the last century over access to oil, and not just recent wars on behalf of Our Greatest Ally? It is likely we are headed toward a new era of food insecurity and access to fresh water will be a problem again, bringing with it new conflicts.
In times of plenty we can worry about whether an orphan in Bangladesh has enough to eat because our own kids are eating way too much. But in times of scarcity? Screw that orphan in a country most people can't locate on a map. My kids need to eat.
When you peel away all the layers of the human experience, our lives really boil down to staying alive and passing on our genes through our progeny. All the stuff we think is important, music and sports and binge watching Netflix, that stuff only matters to us because right now we mostly have the whole staying alive thing under control. We have plenty to eat and fresh water on demand. We have shelter and no one is trying to kill most of us at any given moment. We have the basics locked down to such an extent that our leisure industry generates untold billions in revenue every year.
What no one seems to understand is that this state of existence is a tiny aberration in human history. The Great Depression and the Dust Bowl were just a century ago in America and famine and genocide are contemporary issues in much of the world. This state of life without much in the way of danger other than driving too fast and eating too much is almost completely without precedent in human history. Life is far more often solitary, poor, nasty, brutish, and short than it is Disneyworld vacations and standing in line to get the newest iPhone. Thomas Hobbes was depressingly correct when he wrote in 'Leviathan': 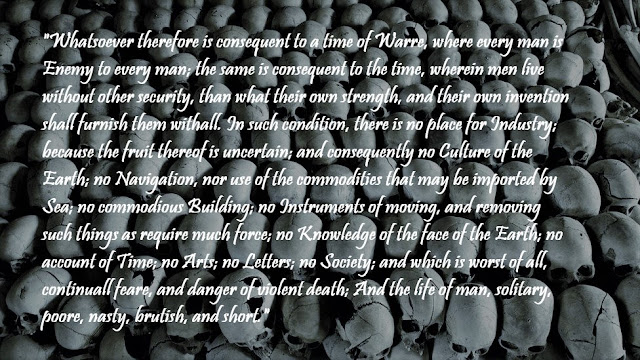 What the natural state of mankind has led to and is leading to again at breakneck speed is tribalism and what NormieCons decry as "identity politics". Tribes have fought against other tribes to gain their resources or to just eliminate a competitor forever. Think about it. If you have limited resources, who are you going to feed, your own children or the children of some random person 100 miles away? Or who are you going to protect, your niece or some girl living in Bolivia? More relevant to this conversation, people support politically the things that are important to them and that benefit their extended family.
We sort of forgot this for many years thanks to the relative homogeneity, affluence and safety of living in America and now we think that this condition is the norm rather than a very weird outlier in human history. When White people do see racial and ethnic tribalism appear, it startles us and offends the carefully crafted narrative we think everyone else believes in. Thing is, they don't. That whole MLK "content of their character, not color of their skin" spiel? That is bullshit and always was. The only people who ever bought into that were White people and now it is biting us in the ass and making us have the sadz. As Americans rapidly slide into minority status in our own country, all of the other groups are making quite clear their intent to loot and pillage what they can, while they can, for their benefit. Why wouldn't they, it is one of the most basic human expressions to provide for your own even at the expense of others.
"Identity politics" is here to stay, mostly because it has always been here and never went anywhere. If you don't understand this, you don't understand anything about human nature or how politics works and you probably should keep quiet about most issues. Normiecons who wail and gnash their teeth and rend their garments over "identity politics" are worse than useless. They should be roundly mocked for being dumb and then promptly ignored in the same way you should treat libertarians.
If you don't stand for your own people, no one else will and we will perish.
Posted by Arthur Sido at 3:04 PM