The collapse of the Soviet Union was the most important geopolitical event to occur in my lifetime, far more so than 9/11 or the wars in Iraq and Afghanistan. It changed the political map and it changed the way the world interacted. For the first 20 years of my life the threat of nuclear war was always present and suddenly that threat disappeared. It wasn't like the nukes went away, just that there didn't seem to be a plausible scenario where we would shoot them at one another. The Cold War between the West, represented by America and NATO, and the East, consisting of the Soviet Union and sort of China, was over after 44 years.
As part of the collapse of the Soviet Union, the formerly independent states that made up the U.S.S.R. found themselves independent once more. The Baltic states became three nations. The southern Soviet Union broke up into states like Kazakhstan and Georgia. But the biggest of them all was Ukraine. The Ukraine is home to rich farmland and just as important a number of "warm water" ports on the Black Sea which provides access to the Mediterranean Sea and eventually the Atlantic via the Bosporus Strait and Dardanelles through Turkey. What most people don't realize is that the Ukrainians at the time of the break-up of the Soviet Union and their declaration of independence inherited the Soviet nuclear arsenal housed in Ukraine, making them for a time the third largest nuclear power in the world with nearly 1,700 nuclear warheads.
This didn't last for long as the Ukrainians agreed to full de-nuclearization, becoming the rare nation that possesses nukes but gives them up. As part of their agreement to disarm themselves, the Budapest Memorandum on Security Assurances was signed by Ukraine, Russia, the U.S. and U.K. pledging to respect the territorial boundaries and sovereignty of Ukraine. Part of the agreement was that these great powers would defend Ukraine if they were the subject of aggression by another nation. This seemed like a solid deal, as nukes are notoriously time consuming and expensive to maintain. But....
Fast forward to 2013. The president of Ukraine, Viktor Yanukovych, adopted a position of building closer ties to Russia rather than the EU. This led to protests in Ukraine and eventually he was ousted as President. The people of Eastern Ukraine, which borders Russia, were apparently more favorably inclined toward Russia. This was especially true of the Crimean Peninsula circled in red below. 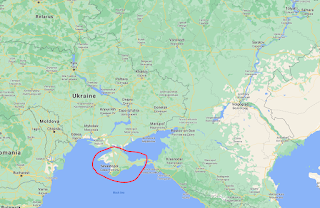 Crimea includes the city of Sevastopol, an important port and home to the Russian Black Sea Fleet. It is also home to a bunch of people who consider themselves Russian....

I have no idea how accurate that it but having people of one ethnicity in a nation of another is one of the causes of World War II and has been a problem for a long time in Europe.
Fast forward again to today. As I mentioned yesterday in A Perfect Storm Of Stupid there seems to be renewed sabre rattling going on, Russian forces moving to the border in the Donbass region and the potential seems to be there for a significant conflict. Whatever side you take in the conflict, I do know this much: Ukraine chose to divest themselves of their nuclear weapons and downsize their military and in the real world exposing yourself as weak is an invitation for the predators to take advantage. Shortly after the annexation of Crimea, some in Ukraine were starting to see disarmament as a mistake:
Ukraine may have to go nuclear, says Kiev lawmaker
Ukraine may have to arm itself with nuclear weapons if the United States and other world powers refuse to enforce a security pact that obligates them to reverse the Moscow-backed takeover of Crimea, a member of the Ukraine parliament told USA TODAY.
The United States, Great Britain and Russia agreed in a pact "to assure Ukraine's territorial integrity" in return for Ukraine giving up a nuclear arsenal it inherited from the Soviet Union after declaring independence in 1991, said Pavlo Rizanenko, a member of the Ukrainian parliament.
"We gave up nuclear weapons because of this agreement," said Rizanenko, a member of the Udar Party headed by Vitali Klitschko, a candidate for president. "Now there's a strong sentiment in Ukraine that we made a big mistake."
Weakness is never a virtue in a world filled with predators. While I am not a nuclear physicist I can safely say it is far easier to remain a nuclear power once you have nukes than it is to rebuild your nuclear capacity from scratch.
What does that have to do with us?
I am sure I am not the first one to say this but we are in a new Cold War in America, a Cold War that threatens to turn hot at any moment. It is a Cold War between the heritage American people and the occupied government that illegitimately rules over us. Both sides distrust and openly hate each other and many on both sides are looking for an excuse to start shooting. The occupied state uses proxies to wage this cold war against us, law enforcement and black Lives Matter, antifa and the degenerate freaks who run our educational system and entertainment world. On our side our allies in the halls of power are very few and growing ever more scarce.
In the Cold War one thing kept it from going hot: both sides had nuclear weapons. The doctrine of Mutually Assured Destruction was all that stood between the world and nuclear devastation. The Communists wanted to conquer the world but what is the use of conquering the world if what you conquer is a nuclear wasteland? So both sides schemed and maneuvered but it never really went hot.
In our Cold War, what is stopping the gulag bound railcars and re-education camps?
400 million firearms
That is it, that is all that stands between your family and a bullet in the back of the head in some dank basement somewhere. The police aren't going to save you, too many of them are terrified of losing their pensions. The Constitution? Don't make me laugh, that old piece of paper only means what 5 of 9 unelected justices say it means on a given day.
Ukraine is learning the hard way that when you give up your ability to respond to violence with violence, you lose. Every single time. Russia has over one million men in uniform and reportedly has around 13,000 tanks, more than double what the U.S. can field and far more than the 2,400 Ukraine is reported to have on hand. Russia boasts more than 4,000 military aircraft while Ukraine has around 285, fewer than military powerhouses like Canada and Chile. The Russians have more of everything, helicopters, artillery and naval vessels. By most metrics the Russians have the second most powerful military in the world. Other than begging the U.S. and NATO to get involved, what is Ukraine going to do if Russia crosses the border?
Ukraine allowed herself to be disarmed based on promises of security guarantees including one from the country right next door that has had conflicts with Ukraine for centuries. Based on that promise, Ukraine is all but defenseless.
We are given similar promises. Just agree to turn in your guns and the police will protect you! Bullshit. Once we are disarmed, they will never let us re-arm ourselves and then the American Cold War will turn bloody in a heartbeat.
Right now the uneasy peace is maintained because the ruling class fears us. They only fear us because we can shoot all of them, put them in mass graves and not even exhaust a fraction of our ammo stash. Without those guns and that ammo, they no longer fear us and this changes from two predators warily circling each other into one predator chasing down prey. We can never let that happen and must not allow it to happen, by whatever means we need to take to prevent it. They will gladly sacrifice hundreds of Americans in false flag shootings to achieve their goal and our determination must at least match theirs. 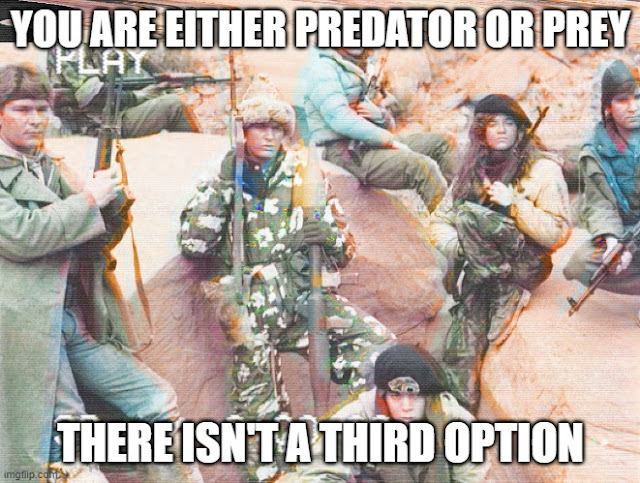